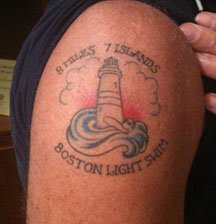 John DaPrato will swim in the Boston Light Swim this Saturday as part of a relay team called The Coney Island Stowaways. He wrote a poem in anticipation.

so, what is an out-of-work
Coney Island swimmer bound
for Boston supposed to do?
The Fung Wah Bus Company’s
twelve dollar fare is long gone —

the Feds crashed the place
and crashed it hard —
… now, there’s a huge padlock
on the old rusty gate —
hey, too many safety violations
to score..

well, i’ve been thinkin’ and
thinkin’ ..

why don’t i just hop on an unguarded,
docked barge or even a slow moving
freighter bound for St.John’s or
Newfoundland? ..

i’ll catch it out in the
Coney Island shipping lane
with a fierce front-crawl
and then lay-low through
the night.

i could read the stars and
pick-up the shore past
Nantucket then keep a
real close – watch for
Harbor lights..

i could hope for low swells
then take my chances
after the long jump in the cold,
open sea.

it could be a Coney Island
Stowaway (or two or three)
swimming hard and
swimming fast
toward the great, bright
Boston Light..