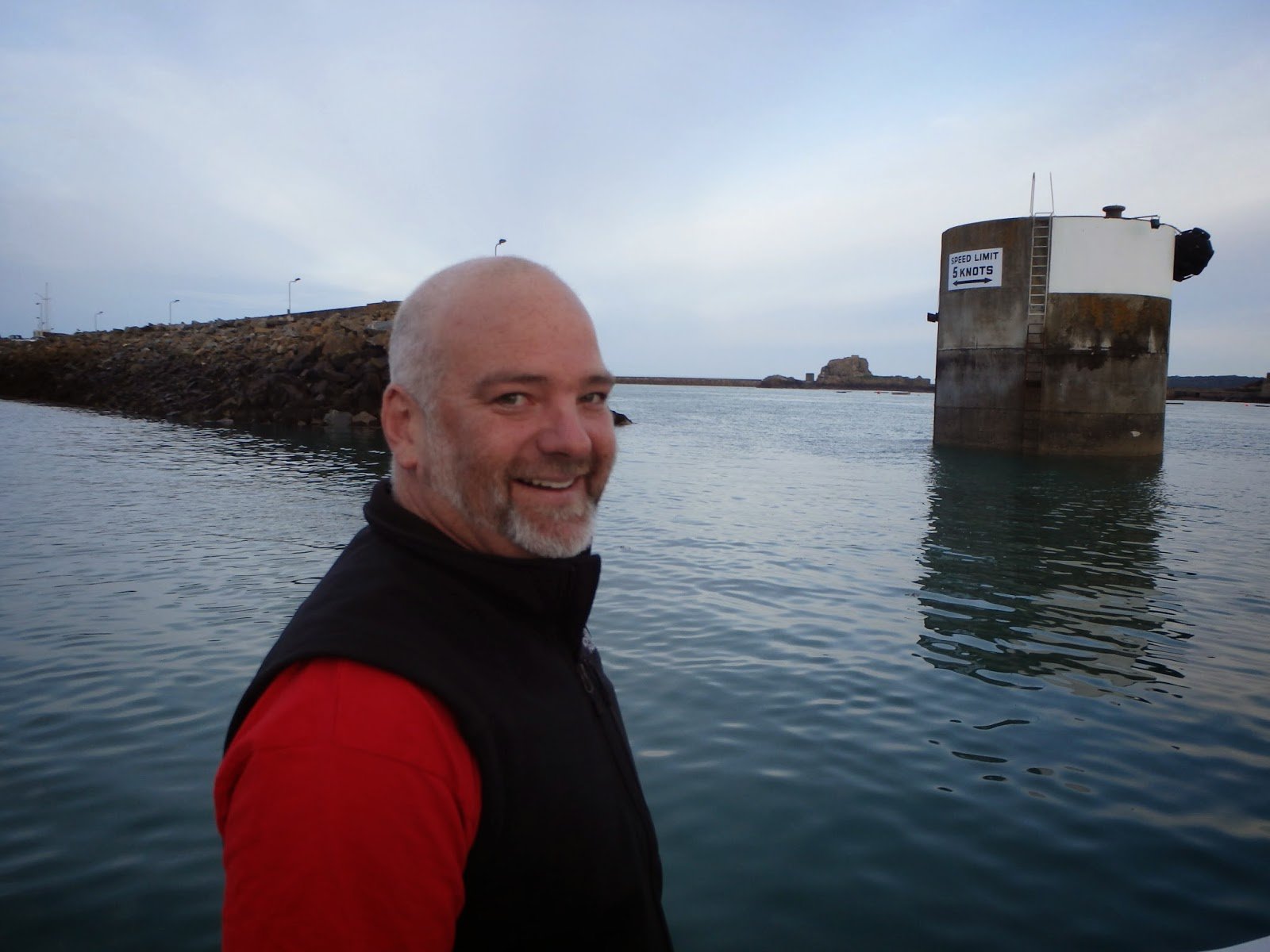 There is almost nothing as comforting, deep and well-deserved as a nap after a punishing endurance event. The body and the mind have been taxed to its maximum and slumber provides that much-needed recovery.

That is exactly what Adrian Sarchet earned after his 11 hour 29 minute circumnavigation swim around Jersey in the British Channel Islands (“Round Jersey“).

Under the guidance of escort pilots Charlie Gravett and Mick Le Guilcher with crew member and support swimmer Graeme Lowe helping the Jersey Long Distance Swimming Club-sanctioned swim, Sarchet started at 6:02 am and finishing at 5:31 pm at the Elizabeth Castle Breakwater on June 28th.

“I could not have asked for a better support crew. Charlie and Mick are legends in the open water swimming community and have piloted over 90 Round Jersey Swims. Their unique combination of ability, experience and humour made for a great day out in the blue. Graeme Lowe is one of the most experienced open water swimmers in the Channel Islands so to have him as my support crew and support swimmer was humbling. The track athletics equivalent would be like having Usain Bolt offering to carry an amateur’s running spikes.”

Sarchet has been at this swim for some time; 3 years in the making. “On two previous occasions, I have sat in Jersey waiting for acceptable weather conditions, only to be blown out by the wind. On this occasion, we thought we were destined for the same treatment by the elements, but a last-minute break in the wind saw me flying over to Jersey the night before the swim. I have wanted to attempt this swim ever since becoming the first Guern around Guernsey in August 2010.“

When an athlete stands on the shoreline looking to start a swim, sometimes circumstances collude to start an invasion of negative thoughts. “Personally it was not an ideal time undertake this challenging swim,” recalls Sarchet. “Things have been incredibly busy lately and life conspired to put me at the starting line both physically and mentally exhausted.”

But with a number of swims under his cap, Sarchet knew had to handle the situation psychologically and physiologically. “The first four hours of the swim went well. The sea was a balmy 16ºC, the sea conditions slight and my hourly liquid energy feeds were going down easily. It was an honour to have the opportunity to see some of Jersey’s iconic scenery (such as Gorey Castle) from the water.

As I swam between Archirondel and St. Catherine’s, I remembered doing my first four hour sea swim there in 2011 under the wing of another local legend, Roger Allsopp. I remember thinking, ‘This one’s for you Rodg.’ That gave me strength later in the swim as there was no possibility for failure
.” 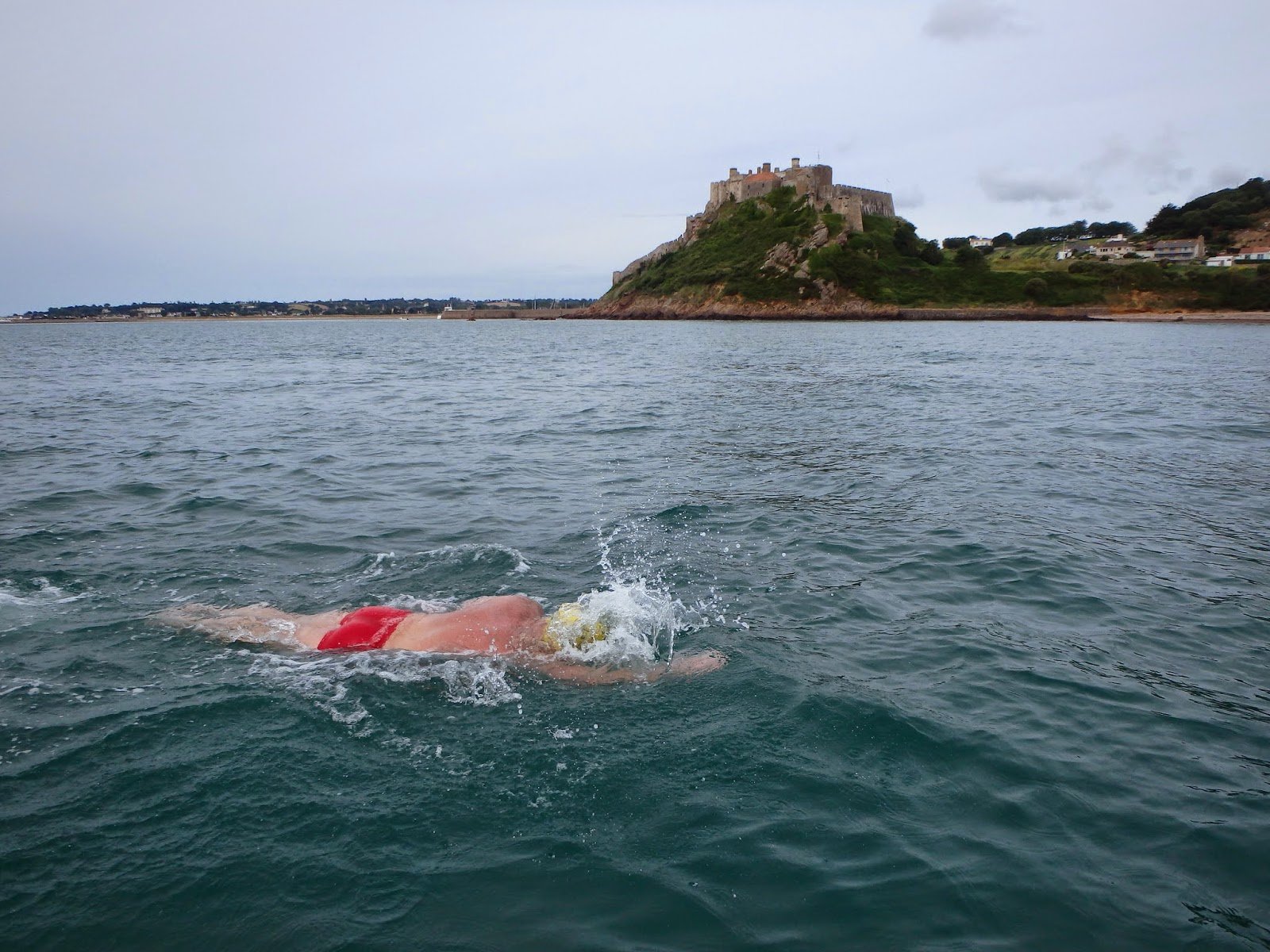 But circumnavigation swims are always tricky as currents and tides have to be considered and navigated well. This is where the experience of pilots Gravett and Le Guilcher were indispensable. “Swimming around islands always seems to be about corners, and bad ones at that. During the Round Guernsey swims, it was usually Pleinmont Point. The Round Jersey swim did not disappoint in this regard because as we rounded the north east corner of the Island, the sea conditions changed, becoming turbulent and confused, before rising into a 2-metre swell. These conditions lasted 3 hours while we travelled down the entire North coast.

By the time we turned onto the West Coast, after another interesting corner at Grosnez, I was in pretty terrible shape. The confused water and swell had left me with an intense bout of dizziness and that had turned my stomach. Unable to even consider my liquid energy feed, we reverted to Plan B and I had plain water and chunks of chilled melon each hour
.”

Then came the witching hour. “Hours 8 to 10 of the swim were a blur of pain and determination. The one good thing was that the dizziness left me and my stomach improved, leading to me raiding Graeme’s ham and cheese sandwiches.

An hour and a half from the finishing line I hit rock bottom. I had nothing left in the tank. I honestly considered getting out. Two things saved the day for me. One was remembering Roger’s advice not to panic and simply to swim to the next feed. The second was that Graeme realised I was in trouble and joined me in the water as my support swimmer; he was swimming with only one arm I think.

With this assistance I toughed-out the last stretch and was relieved to complete this challenging swim by touching Elizabeth Castle Breakwater 11 hours and 29 minutes after I’d started, thereby becoming the first Guern around Jersey. A little too relieved it seems as the thirty metre swim against the tide back to the boat actually proved something of a problem 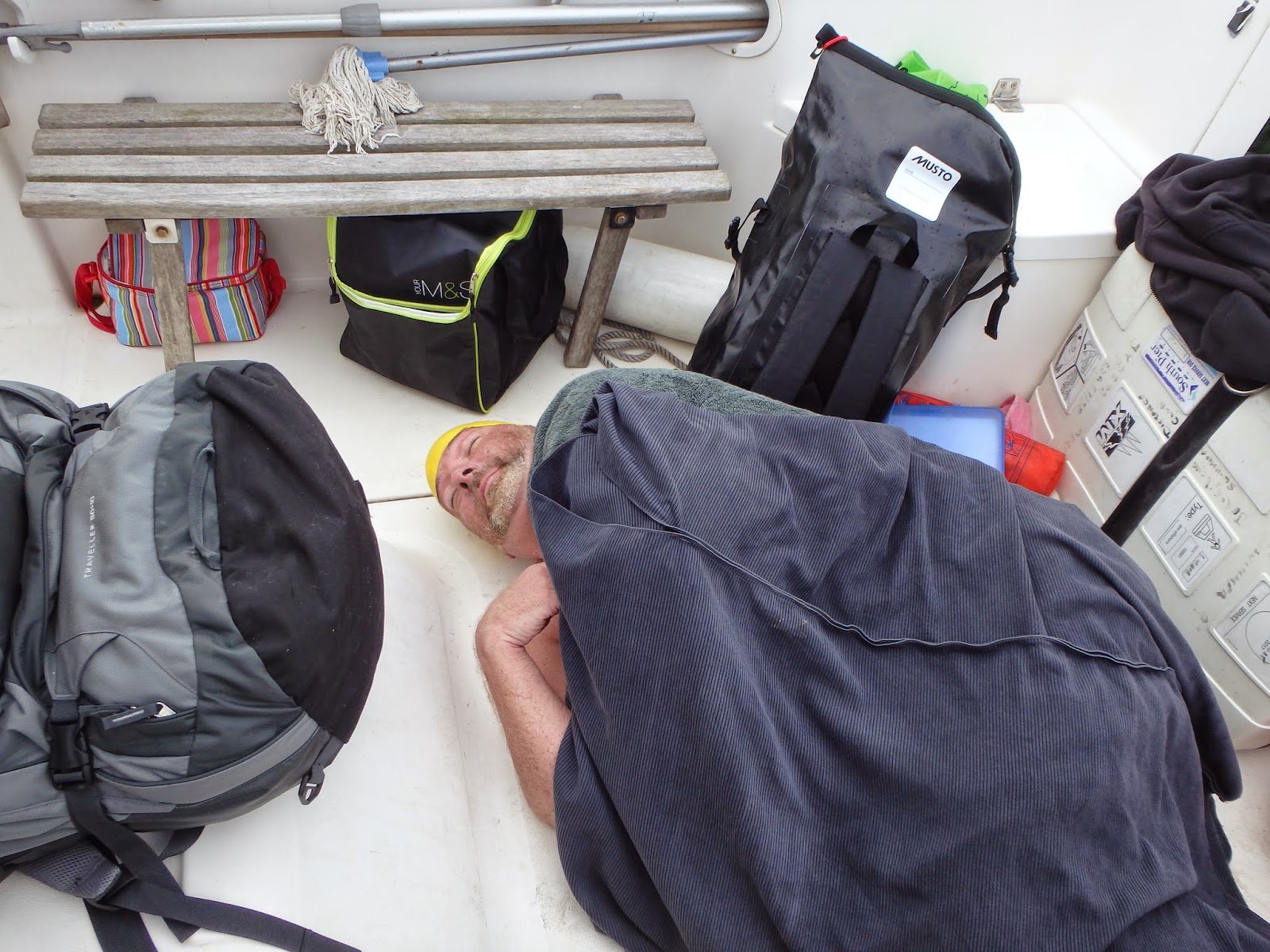 Ever humble and appreciative, Sarchet recalls the people who helped him along the way. “It was all worth it though because back at the dock we had a lovely welcome from members of the JLDSC – to whom I must apologise for being half-dead and not clearly giving my thanks for their support. I would like to thank the JLDSC, my crew and their respective families for their support in this endeavour. I would also like to thank my own family for supporting me so completely in my training and the Guernsey Swimming Club and the Guernsey Open Water swimmers for ensuring I was fit enough to even attempt this swim.”