A Lifetime Of Swimming, Sharing And Supporting 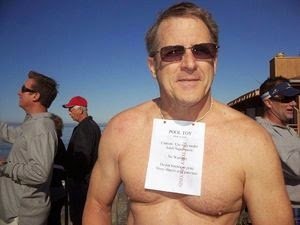 There are some athletes who occasionally dip their toes in the open water and there are others who are lifers. They are in it for the long haul; deep-rooted enthusiasts whose fix is the ocean.

Howard Burns is one of those individuals – like all those wildly passionate ocean swimmers who are lifetime members of the Santa Barbara Channel Swimming Association [see below].

The Oak Streaker from Laguna Beach is a competitive ocean swimmer and swam on Team Jessie that crossed the Anacapa Channel in 7 hours 15 minutes. He penned the following poem:

It was bright, large and white
Glowing across the sea
Sparkling night ocean foamed
As the Oak Streakers roamed
Thru high tide and kelp grass
In suits, but what is that odd glow?
the water surface fluctuates from an odd flow
there is another odd situation
It comes from the Oak streaker nation
this light, it shines up not down
From few not one, each cracked, partly drowned
Tales from shore of what beachgoers viewed
Oak streakers don’t tell, Oak streakers mooned

The SBCSA currently has 39 lifetime members of its organization: