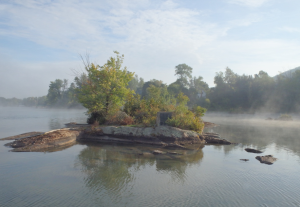 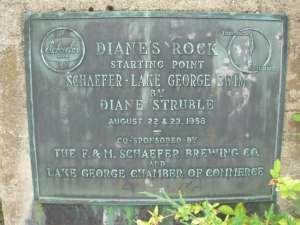 What do American President Thomas Jefferson and U.S. Olympic marathon swimmer Alex Meyer have in common?

A love of Lake George in New York.

President Jefferson said in 1791, “Lake George is without comparison, the most beautiful water I ever saw; formed by a contour of mountains into a basin… finely interspersed with islands, its water limpid as crystal, and the mountain sides covered with rich groves… down to the water-edge: here and there precipices of rock to checker the scene and save it from monotony.”

Meyer is one of the four co-event directors of the 2016 Lake George Marathon Swim that is organized to highlight Lake George and the history of Lake George marathon swimming.

The 32-mile (51.5 km) swim commemorates Diane Struble‘s pioneering lake crossing in 1958 and the 6 other solo swimmers and one relay that replicated her inaugural swim.*

The night swim is scheduled to start at 5 pm on Diane’s Rock [see above] on September 17th with a mandatory closure of the course at 5 pm on the 18th. Registration is now complete when its maximum field was quickly reached with the following solo swimmers and teams:

*Solo Lake George crossings have been completed by the following swimmers: