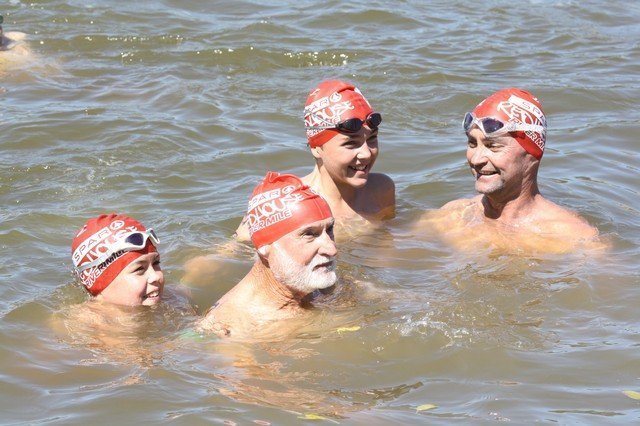 Mally Richards set a record that may never be broken in the open water swimming world…unless he extends his own record next year.

The 89th SPAR River Mile took place at the picturesque Cannonville Village on the Sundays River with over 1,300 participants taking part over the two day event in near perfect weather including the venerable Richards with his son and grandsons.

The 80-year-old was the star of the event who completed his 60th River Mile.

Richards finished a creditable 216th and, as a tribute to his commitment to health and the SPAR River Mile, he was awarded an Open Water Swim Participation Longevity World Record certificate from the International Marathon Swimming Hall of Fame as part of the Festival.

Olympic open water swimmer, Jessica Roux of Port Elizabeth, defended her ladies mile title in a hard fought race with young 15-year-old Megan van Wyk of Team Watersmart with Roux’s Aquabear team mate Jessica Liss in third place. In the men’s race it was 17-year-old Grey High School scholar Chris Reid who took the honours from Byron Lockett and Alard Basson. Basson’s twin Alaric finished 6th and they were one of two pairs of brother s who finished within the top ten with the Jones’ brothers Daniel (4th) and Jason (8th).

The full results from the River Mile are available at www.rivermile.co.za.

Mally Richards is shown above with his grandsons Marc (11), Sean (14) and son Kevin (a former 6-time River Mile champion).