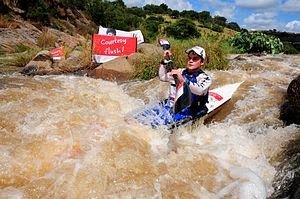 One of the toughest endurance events around the world that tests one’s athletic skills, raw endurance and versatility is the Pope-Ellis Ironman and Ironwoman race. Can there be any tougher trio of events that tests one so much on land and water?

The trio of endurance events includes the Comrades Marathon, the aQuellé Midmar Mile and the Dusi Canoe Marathon, all conducted in the Pietermaritzburg and Durban areas in South Africa.

The Comrades Marathon is a 89.9 km (56-mile) ultra-marathon run held in June that starts in Pietermaritzburg and finishes at The Kingsmead Cricket Stadium in Durban. The race distance is subject to change and is the world’s largest and oldest ultramarathon race. The direction of the race alternates each year between the “up” run (87 km) starting from Durban and the “down” run (89 km) starting from Pietermaritzburg. Runners over the age of 20 qualify when they are able to complete an officially recognised marathon (42.2 km) in under 5 hours. During the event an athlete must also reach five cut-off points in specified times to complete the race.

The aQuellé Midmar Mile is annually held early February in Pietermaritzburg and is the world’s largest competitive open water swim, a straight point-to-point race across the Midmar Dam.

The Dusi Canoe Marathon is arguably the world’s most prestigious canoe (kayak) race, held in mid-February between Pietermaritzburg and Durban, South Africa. It is run along the Msunduzi River, which is more commonly referred to as the Dusi (or Duzi) river over a total distance of 120 km.

The Pope-Ellis Ironman and Ironwoman competition is based on a formula where each competitor receives a percentage score based on the following: