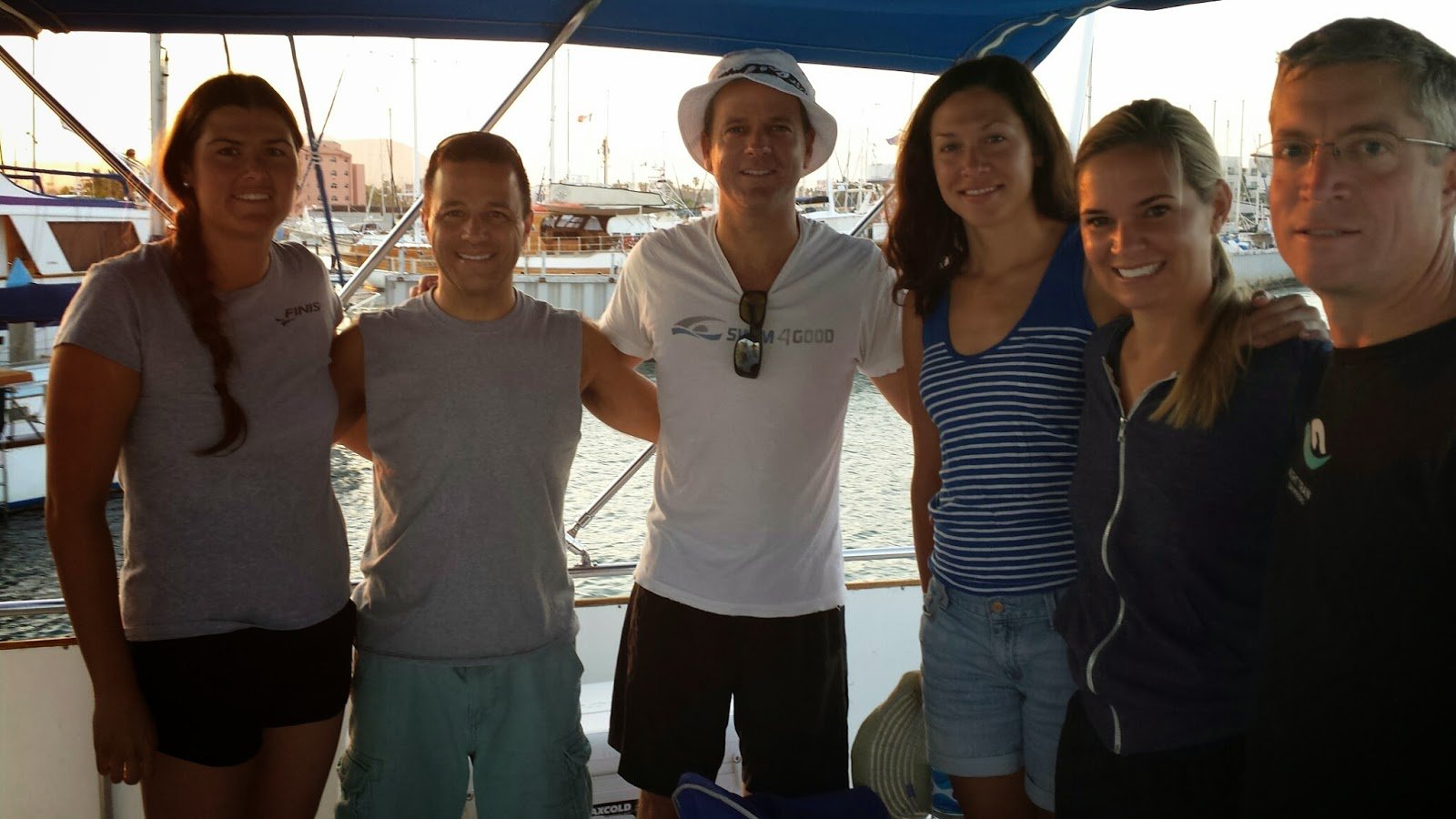 On June 3rd, David Ogden, Mauricio Prieto, Luane Rowe, Richard Ernst, Shannon Navarro, and I tried to swim 100 miles across the Sea of Cortez – the fifth try in history. The morning of the swim the sea was a flat, turquoise lake and we felt lucky and optimistic that we might be the first to cross. Dolphins were seeing us off — a good omen. My turn was second – right after Luane, a champion swimmer from Australia. We were making great time and Baja California kept growing more distant as we swam off into the blue horizon – mainland Mexico nowhere in sight. I was ready to swim a 10 am shift, 4 pm shift, 10 pm shift, 4 am shift and so on for the next two and a half days. Our whole team had prepared for this kind of routine.

The first shift felt great. It was fun to breathe and see my teammates giving me a thumbs up on the boat. The water was sapphire blue and the sun rays looked like long chards of glass. Mauricio swam after me followed by Richard, Shannon and Dave. We were all feeling pretty high. The second shift, at 4 pm, I was beginning to get stung by invisible jellyfish – the kind of stings that shock you temporarily, like tiny needles into the skin but that fade in seconds. It was unsettling but still not enough to distract you too much.

Preparing for the 10 pm night shift, my mind began searching through the card catalogue of all the information I’d read about Cortez from other swimmers. The wind had picked up and the water was getting rough. Luane, one of the most intrepid swimmers I’ve ever met, was churning along although I could tell she was getting stung by the spasmodic jerks in her otherwise strong rhythm. What I was most scared about were the jellyfish that paralyze your muscles and give you essentially third degree burns – something I had read about during the second thwarted attempt. Suddenly we heard Luane scream, “F*%K! F&#K!” as she stopped in the water. We were watching her green blinky light on the top of her cap sit motionlessly in the water as she tried to get the tentacles off her body. Since it was pitch black dark, I didn’t know if she was all right. Vito Bialla yelled at her, “You ok?” She swam over to the boat and I leaned way over the side and handed her a credit card so she could scrape off the poison. I looked at Vito and could tell he was calmly monitoring my reaction since I was next. He said, “She’s tough as nails. Look, she won’t touch the boat. She’s doing her thing and will keep going.” And she did.

I didn’t feel like myself anymore. I felt suddenly panicky – like a bucket of fear. I understood that I was going to get stung badly and had no idea what that would mean. Mauricio reassured me, “You can do this. You’re stronger than you think.” We were using a jellyfish repellant cream and I lathered up every inch of my face and body hoping to create a buttery shield. Richard told me that I looked like I was made of porcelain. “One minute!” yelled Vito. My hands were shaking comically as I tried to wipe the fog from my goggles (as if I was going to be able to see anything anyway). Feeling every bit afraid, I took a deep breath and dove into the blackness.

Swimming at night in the middle of the ocean you don’t think about the sea monsters deep below – like the man-eating squid that many talk about. You are desperate to stay next to the boat and not get lost at sea. I had tucked a credit card and a whistle in the back of my suit – the credit card being the true thing I needed: the whistle now a symbol of a safety measure I incorrectly thought I would need. Black water enveloped my bare limbs and I saw hundreds of golden bubbles shimmer off my fingers with each stroke – something I had heard about but didn’t really believe until now. I was getting stung by the same jellies as the earlier shift when suddenly it felt like 15 long knife-like fingers grabbed me all at once around the neck and shoulders. I stopped cold and screamed exactly as Luane had. I was stunned at how it seemed to reach way too many cells all at the same time. I knew I had to regroup as Luane had. I scraped at my neck and angrily kicked the water as hard as I could to try and minimize the pain and continued. This same thing happened to every single member of the team at least 3-6 times during their shifts. When my hour was up, Mauricio jumped in – awaiting the same fate. I was glad to have an extra credit card to give him so he could scrape off a jellyfish all over his body. After spotting for him, I went below to the bunks where I was supposed to rest a couple of hours before my 4 am shift. The wind picked up to 25-30 knots, waves were breaking and the boat was careening wildly from side to side. Anything that was not secured to the boat began crashing to the ground. At midnight I heard Shannon scream from the water: “OW OW OW OW OW OW OW OW!” Hearing her, I felt like I wanted to cry – things weren’t getting better. Shannon kept on, like a champ. When it was Dave’s turn, he got stung in the face but was stoic and never once complained. It goes without saying – my incredible teammates made me stronger than I ever could have been by myself.

My 4 am shift came and I had difficulty ascending the stairs to reach the deck. It was impossible to walk as the boat lurched from side to side. We were scrambling and staggering absurdly – grasping anything we could grab onto. At one point I saw Mauricio crawling on all fours and began sliding into a water cooler. I dove into the Sea of Cortez’s ruthless maw and hoped for courage. About half way into the hour I felt a throbbing mass of pain hit my face and go into my mouth (you’d think by now I wouldn’t swim with my mouth open). “Mother F#@$er!” I cursed like a sailor and scraped the tentacles off my face, regrouped, and continued. Somehow the hour was eventually up and I got out feeling drained from the stings and the rough waves. I then spotted for Mauricio — all the while worrying about Richard who was so sea sick that he kept on throwing up off the side of the boat. He never once complained and dove in and got stung badly in the first 5 minutes of his 6 am shift.

At 7:00 am Vito called us to a team meeting. The weather was getting even worse and it was too dangerous to be on the boat. There was nothing in our favor – the weather and ocean were adamant. It was clear that this attempt was impossible; I felt humble and completely sure that this was the only choice. The Sea of Cortez wasn’t going to let us cross her this time. We had swum 22 hours and made it 48 miles — just shy of the halfway mark. And Mexico wasn’t even in sight.

Huge huge huge thanks to friends and family who gave us support – it really made a huge difference!

* Equipment used: swim cap, goggles, standard swimsuit, Safe Sea® (jellyfish sting protective lotion*). A note on the jellyfish lotion: I’m pretty sure that using it made it possible for us to continue although the stings hurt badly. Without it, I think the swim would have been called due to jellyfish stings.

* Swim called off at 7 AM, June 4th due to dangerous weather conditions