A True Waterman From The Solomon Islands 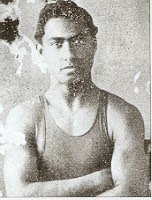 Wickham from Roviana Lagoon in the Solomon Islands was credited with shaping the first surfboard in Australia and introducing the crawl stroke (freestyle) to Australia when he demonstrated the crawl at Bronte Beach in Australia, although the freestyle at that time was widespread in many parts of the Pacific.

Wickham also established the still-standing world high dive record at 62.4 meters (205 feet) while diving into the Yarra River. He was reportedly in a coma for a week after.

Using freestyle, he also played a role in the development of body surfing when he was catching waves in Manly Beach in Sydney. A true hero and open water pioneer in various disciplines.