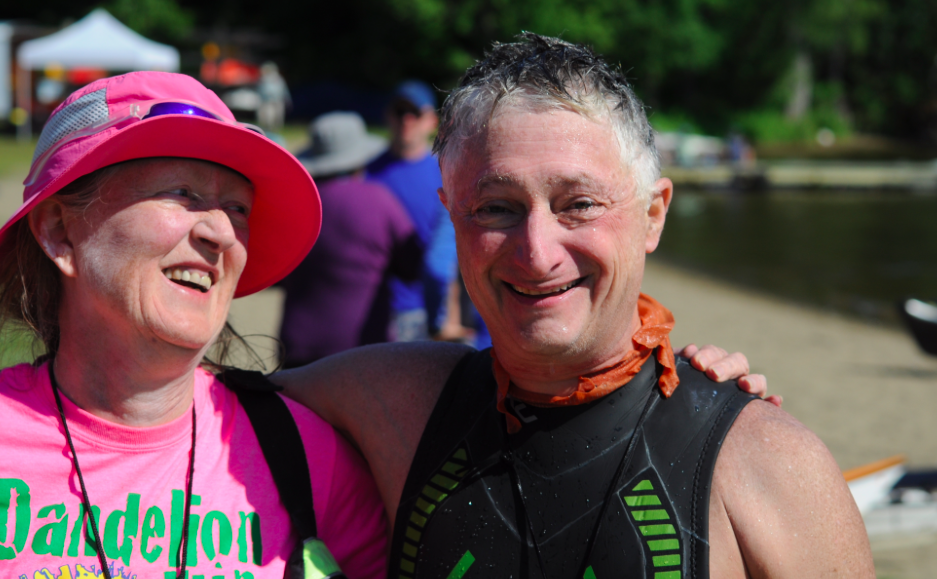 On July 29th, the Ninth Annual Kingdom Swim was held on Lake Memphremagog in Vermont that drew athletes from 25 American states, two Canadian provinces, and Argentina.

The swimmers ranged in ages from 10 to 74, but the star of the event was 34-year-old Sandra Frimerman-Berquist who set the record for the 25 km Border Buster swim in 5 hours 49 minutes.

Race founder Phil White explained, “30 swimmers completed the Border Buster within the mandatory pull time of 10.5 hours. 37-year-old Stephen Rouch won the men’s division in 6 hours 25 minutes and 13-year-old Vera Rivard came in third among the females and fifth overall in 7 hours 15 minutes. She is the youngest to complete the Border Buster.

The most mature to complete the Border Buster was 68-year-old Dan Shaub in 9 hours 58 minutes. Shaub and his local yacker Pam Ladds sported a combined age of 136.

The Busters headed out at 6:00 am with mist rising from the lake after a cold night, but had the benefit of light tailwinds.

One of the purposes of this cross-border swim (along with In Search of Memphre) is to promote a more open border with our Canadian friends. This year we celebrated a change in Canadian rules that now coincides with United States rules that you do not need to report at the crossing if you don’t touch Canadian soil or a Canadian boat

One of the most unusual and unique awards in the open water swimming community are hand-carved walking sticks, created by Bill Peck. 24-year-old Anthony Szmul won the sticks in his WOWSA 10 Mile Championship victory in 4 hours 36 minutes. 22-year-old Emily Boerger captured the women’s crown in 4 hours 47 minutes. 10-year-old Margaret Rivard became the youngest to complete the 10-mile course which she did with a time of 5 hours 50 minutes, placing her in the middle of the pack.

30-year-old Eric Nilsson returned for another year and claimed the crown as King of the 10 km with a blistering time of 2:03:34. Eric is one of the fastest swimmers to ply the waters of Lake Memphremagog and it was great to see him finish so strong. Winning among the women was 31-year-old Rachel Horgan in 2 hours 23 minutes with 45-year-old Kevin Jaubert finishing second. Kevin one of two lifers who have swum in every single Kingdom Swim since we started in 2009.

In the 5 km distance, it was a battle of east and west among the women, with 31-year-old Elizabeth Mancuso from Boston (1:09:49) fending off 55-year-old Ali Hall from San Francisco (1:15:24). Hall swam in the very first Kingdom Swim in 2009 and many of the swims since then. It was great to see her back for another year.

Winning among the men was 50-year-old Lawton Harper with a time of 1:23:13. 47-year-old Laura Maliewski kept her streak alive as a Lifer as did her yacker Susan Watson.

In the 1-mile swim, 14-year-old Luke Nicholas gunned down Stephen Rouch, with a winning time of 0:19:28. But then again, Stephen had just finished the Border Buster and was still hungry for one more mile in Mighty Memphremagog before the day was done.

Luke’s dad, Kent Nicholas, narrowly missed the chance to swim the one-mile course with his son, completing the Border Buster in 8:25:15 just 25 minutes after the start of the 1 mile. Gayla Chalmers took first place in the 1 mile in a time of 0:26:20. Gayla was scheduled to swim the Border Buster, but had to pull when her son got sick. Nevertheless, she got a taste of the Memphremagog waters with this swim and we have a hunch, she’ll be back. 12-year-old Lilly Jaubert, won the miler among the female youth.

Winning in the ¼-mile swim were 10-year-old Claire Jaubert and 11-year-old Rex Lord.

The Kayaker of the Day Award goes to Memphremagog Winter Swimmer and ultra-marathon swimmer Mary Staples who came from Georgia to volunteer to yack for a Border Buster.

Besides the walking sticks, prizes of Brault’s Beef Jerky and Couture’s Maple Syrup were given to the winners in each race with jerky given to the 2nd and 3rd place finishers.

The Memphre Flotilla provided motor boat support out on the lake from 6:00 am to 4:30 pm led by Greg O’Connor and Kellie Latimer of Massachusetts. They were busy because had a record number of DNF’s, not because of cold water or windy conditions, but because so many were ‘on the stretch’ attempting the longest swims of their lives. It was inspiring to see their efforts and good to know our flotilla could handle the needs of our swimmers.

Memphremagog laid down her defenses this year and offered up warm water, light winds, and glorious sun. Where it came from in this cloudy, rainy, windy summer is anybody’s guess, but we enjoyed the best day of the summer and thank Memphre for her warm welcome