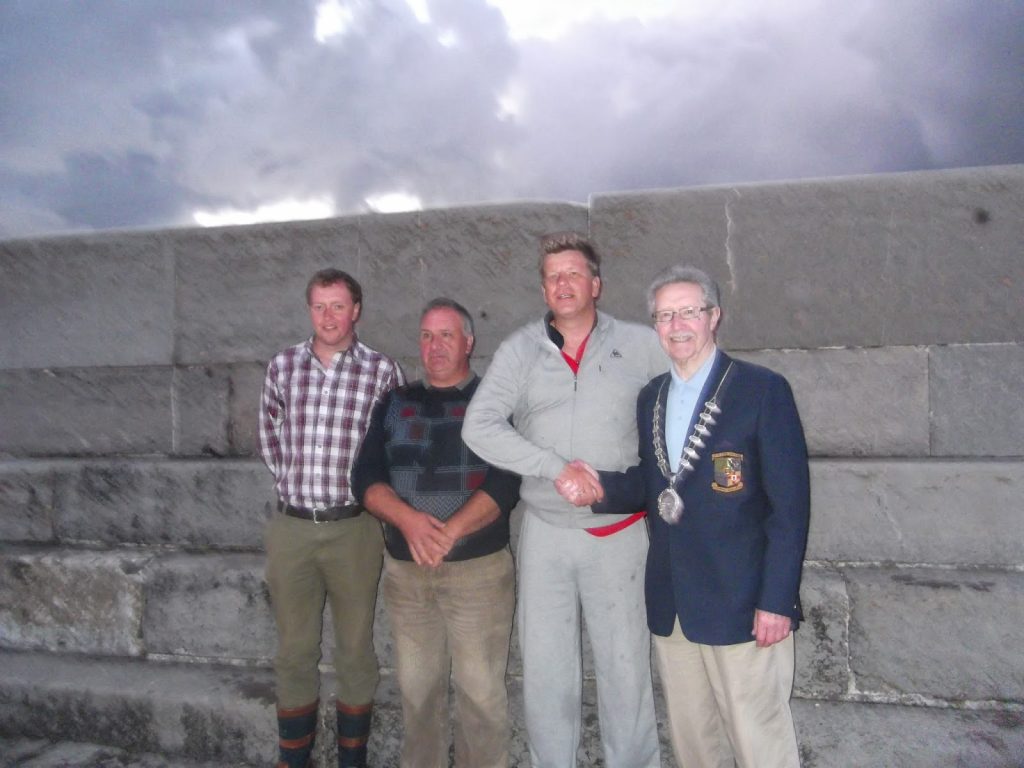 As Quinten Nelson and Andrew Coyle of the Irish Long Distance Swimming Association walked to the boat in the early morning of July 30th, they were happy to see a tiny black rental car coming at them a 5:15 am. “The care was filled by its driver: a tall, bulky, fresh-looking man with fair hair, known as Milko Van Gool,” said Coyle.

It was all business. Escort boat captain Nelson asked Milko how he was feeling and the reply was very positive. “The car was parked, Milko had his photo taken with his passport open, the boat was untied, and without any further ceremony we departed.”

It was a fortuitous start to the day. “The conditions were very soft for the start, almost calm, with a clear sky. There was no precipitation and a full tide.” Milko had a thick layer of grease applied around his limbs for comfort during the swim. His very dedicated trainer, Marcel, supported Milko with an authoritative voice and a shrill whistle throughout the entire swim. Marcel did not leave the deck even once.

When the boat, named Guy and Clare Hunter arrived as close to the rocks at Donaghadee as was safe, Milko jumped into the water and swam over to shore. Nelson then approved that he was ready to depart by sounding the boat’s horn of the 18 nautical mile crossing to Portpatrick. “Milko’s stroke was very strong, with a positive roll and steady six-beat kick which lasted right to the finish.

A couple of hours from Donaghadee we began to sight Lion’s Mane jellyfish at which point Marcel would issue a deafening whistle
.” Marcel could lift his fingers to his mouth and whistle almost instantly. “He would then visually instruct Milko what direction to swim in to avoid them. But one jellyfish, which Marcel hadn’t seen, caused Milko to take a bad cramp as he kicked violently to avoid it. This happened two hours forty minutes into the swim, and Milko groaned in pain when it occurred.”

But 2 minutes later he had recovered fully. Apart from jellyfish, the only wildlife visible in the water were a number of very sturdy looking seals who seemed intrigued by the Dutchman, swimming along quite close to him for a period when we were about seven miles off shore “These fellows lifted Milko’s spirits unlike the nuisance jellyfish.”

Milko was also accompanied by a photographer and chronicler named Alan, who worked for the charity which the swim was in aid of. This charity restored Africa’s oldest boat named Chauncy Maples so it may be used as a mobile clinic for the benefit of people living around Lake Malawi.

To maintain his energy levels, the feedings of varying amounts of liquid were done every 20 minutes for the entire duration of the swim. Food was given once an hour in the form of a half banana or biscuit. “This formula seemed to work well for Milko as his stroke rate remained very steady for almost the entire swim, except for the last hour when he was in a state of exhaustion.”

While for the first five hours, the wind was not an issue, blowing between 0-5 knots. Around noon the wind began to increase steadily. At 2 pm, the wind was blowing a southerly 20 knots. “The waves impeded the steadiness of Milko’s stroke at a point where he was tiring; second the boats pitching made it difficult for him to feed and the waves sometimes covered his head while he was drinking; third, the choppy water made it impossible to sight jellyfish because of reflection. As we approached Scotland, the wind was blowing from the south, but simultaneously the ebb currents of the rising tide were moving southwards, we had a wind against tide situation which creates very rough water.”

Nearing the Scottish coast, skipper Nelson was concerned that the rising tide, which floods towards Portpatrick. “With a natural tendency to veer right, this was to augment the problem for Milko, as right, heading from Bangor to Scotland, means south. Thankfully, heeding a great number of gestures, whistles and hollers from Marcel, Milko was able to maintain a good course along with the boat.”

The onshore breeze was creating a hostile landing place for Milko, with waves crashing against the cliff face and frothing quite dramatically. “Exhausted and cold, Milko gradually pulled closer to the rocks. Despite the current, he swam to maintain a course north of Portpatrick village for touchdown. In the final yards before touching land, Milko actually disappeared in white froth before his two hands became clearly visible against the black rocks.”