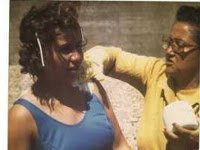 Abla Adel Khairy did something that can no longer be done – she swam the English Channel at the age of 13. Her 12 hour 30 minute journey from England to France was done in August 1974 before age restrictions went started.

Nearly 40 years after her feat, Khairy reflected on her past and looked towards the future.

“My mother, Enas Haqi, was the first Egyptian female short-distance swimmer (at the age of 22) and launched the female basketball team at Cairo University back in 1951, which was unusual and frowned upon by many,” explained Khairy to the Al Masry Al Youm press. “I grew up in a household of a great athlete, and she is the one who inspired me to cross the English Channel.”

As member of the Egyptain national swim team that took part in the International Nile Contest, she was nominated to cross the English Channel. Successful in 1974, she did another (10:52) crossing nearly exactly one year later. She then attempted a two-way crossing in 1976. After 25 hours, she collapsed and was taken to the hospital a mere three miles from finishing. “Swimming in the dark was one of the biggest challenges I faced. I cried the first time.”

But she also looked at the present and its implications for the future. “Nowadays people have changed, and sports for girls are frowned upon by many. The idea that a girl would put on a swimsuit in front of a crowd is unacceptable to many. We have gone 70 years backwards.”