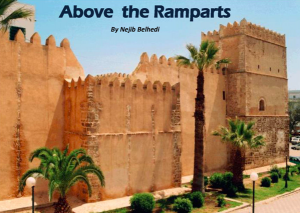 Courtesy of Nejib Belhedi, Sfax, Tunisia. Nejib Belhedi will release his autobiography, Above the Ramparts in the Arabic, French and Russian languages. He explains the reason for the title, “The reason of the title of my book ‘Above the Ramparts‘ is because I was effectively born 10 feet from one of the eastern guard posts of the Fort of Fire (Borj En Nar) at Sfax Médina. From the window of our house or from the guard post, my view navigates above the colossal rampart walls of Sfax.” Belhedi is planning to swim 141 km from the island of Lampedusa in Italy to the Mahdia coastline of Tunisia this coming September. He explains, “The unprecedented swim will be a symbolic crossing that will encourage the stream of immigrants from North Africa to the European continent to think about establishing peace and prosperity in their own native lands. The swim is in the reverse direction of the immigration flow and can symbolize a harmonious and global defense policy of Tunisia.” The former special operator with the Tunisian military is tough and hardened – and aims to swim for the longest period of time non-stop in the sea in history. “Divine power has gave me the energy and the ability to endure swimming non-stop many days in seas. It is the same divine power that support me to pull by swim boats and even a heavy ship weighting more than a thousand tons without any help.” The book describes his childhood to his military career and his marathon swimming career. Copyright © 2008-2019 by World Open Water Swimming Association