Absolutely! The Memoirs Of The Paddlin’ Professor 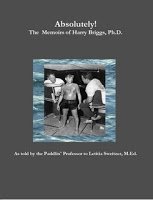 “I have been working on my uncle’s memoirs and finally got it published just in time for his 91st birthday on May 17th when he’ll swim 2 miles across a lake in Louisiana to reach his birthday bash and scholarship fundraiser on the opposite shore,” explained the proud niece. The professor’s life reads like a true Renaissance Man of the Golden Generation. Not only is the eccentric Dr. Briggs still swimming 2 miles and teaching as a college political science professor in his 90s, but he was also a marine who fought in World War II in the Pacific, the first person to swim 32 miles across Lake Erie, and found himself shipwrecked in Alaska.

Absolutely! by Letitia Sweitzer is the name of his biography that can be found here.

Interested swimmers and fans of modern-day heroes can purchase the book with a 16% discount if you use the secret code (EARTH) by Friday, April 27.