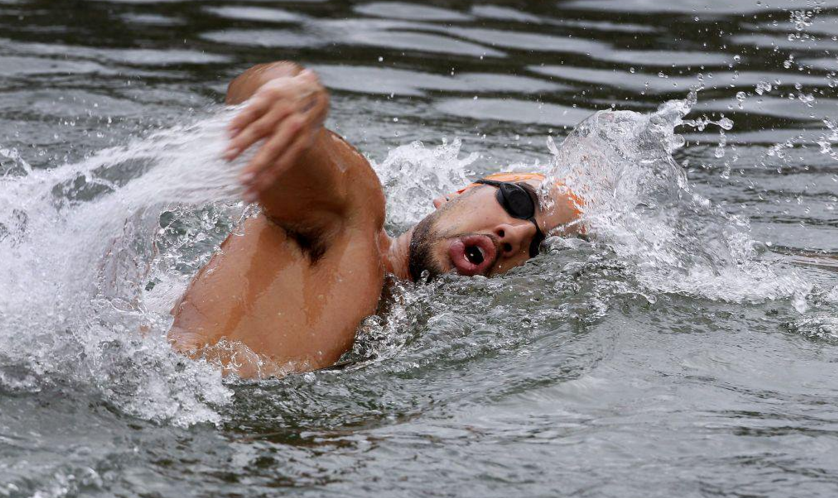 Adam Eilath will attempt to break one of the longest standing records in the open water swimming world.

“The reason this swim is so challenging are the currents. You always need to cross the Golden Gate Bridge during slack tide. So there are only a few times during the year when there is a long slack and a very mild flood and ebb bordering the slack. Nonetheless even a small current can push you far east or west under the Bridge. When Suzanne completed 6 crossings in 2 hours 30 minutes, the last crossing took her almost an hour.”

A member of the Night Train Swimmers, he discusses his 8-way crossing attempt:

Adam Eilath: We will be starting at the south side from the small beach on the south side of the Bridge. This is not the start of most Golden Gate Bridge swims. Most swims start from just behind the south tower, but when Suzanne Heim-Bowen broke the record 30 years ago and swam 6 crossings, she started from the beach…which I will do as well. I will be starting around 6 am depending on what we observe in the water the day before.

Daily News of Open Water Swimming: Who is your pilot and crew?

Adam Eilath: Vito Bialla will pilot on Sequel. David Holscher will also crew along with other Night Train Swimmers. Night Train Swimming has a great community and we all help each other out on these swims.

Daily News of Open Water Swimming: What legally (or historically) comprising of a crossing? That is, do you have to touch a certain rock or just anyone on one side of the bridge or the other?

Adam Eilath: Golden Gate Bridge swims have shortened drastically over the past few decades. According to those who remember Suzanne’s swim she started at Fort Point Beach and swam to the north anchorage and lined herself up with the north anchorage of the tower, getting very close but not touching. She then did the same with the south tower. She did not swim back to Fort Point beach. It’s about 1.5 miles each way according to this course. Current Golden Gate Bridge swims are about 1 mile, so this is significantly longer. Because the water is very rough under the bridge, it is unsafe to touch the anchorages. In fact getting too close can mean you can get sucked in. So I will stay a good distance away about 10-15 feet, but make sure I line myself up with the anchorage. I may even have a crew member take a photo for proof.

Daily News of Open Water Swimming: How long do you anticipate you will take?

Adam Eilath: I hope to complete the swim in 4 hours.

Daily News of Open Water Swimming: What will you or do you call your event?

Daily News of Open Water Swimming: Who is ratifying your swim?

Adam Eilath: I will have members of both the Dolphin Club and South End Club on board the Sequel to confirm the swim.