Add Another Olympian To The Open Water Mix 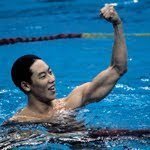 Olympic swimming heroes and heroines have occasionally turned to open water swimming in their post-Olympic careers.

Shane Gould, the five-time Australian Olympic medalist, runs the Devil of a Swim in Tasmania and continues to be a passionate advocate for learning how to swim, especially for those who live near the ocean or on island nations. Sandy Neilson-Bell, a 3-time Olympic gold medalist, continues to run the American Swimming Association open water events in Texas.

As does Janel Jorgensen who leads the Swim Across America juggernaut that has raised over US$40 million to help fund cancer research, prevention and treatment through open water swims literally across America.

There are numerous other Olympic pool swimming medalists who dip their toes in the open water: from New Zealand’s Danyon Loader and Djan Madruga of Brazil as swimmers and coaches to Aaron Peirsol and Mel Stewart as commentators and producers both in front of and behind the cameras.

Djan sums up the love of swimming that these Olympians still have for the water. “Swimming is my life. After the 1976, 1980 and 1984 Olympics, I did some triathlons and the Ironman and kept doing masters swimming to stay in shape and have fun. I do a lot of open water swims and have done masters swimming since 1990. I try to get in 4K four times per week.”

With the growth of open water swimming around the world, the community is seeing more and more of these Olympic heroes spending time at seasides and lake shores.

Dr. Daichi Suzuki (鈴木大地), the Japanese backstroke Olympic champion (1988), is one example. He is helping Japan develop its open water swimming programs where Yumi Kida and Yasunari Hirai are up-and-comers on the international marathon swimming circuit.

Dr. Suzuki (shown above) is a noted author, researcher and commentator who is a deeply passionate and learned advocate of open water swimming and traditional Japanese swimming methodologies. During the 1980s, he brought innovation to the sport of pool swimming with his revolutionary underwater dolphin kick that helped propel him to the Olympic gold medal. His creativity and scientific mind will also prove beneficial in pushing forward the beauty, allure and methodologies in the open water swimming community as well.