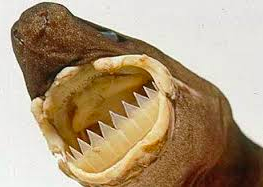 The longer the ocean swim, the greater the chances that something will happen.

Steven Munatones observed “As more and more swimmers enter the sport and swimmers – especially those in their 60’s, 70’s, 80’s and 90’s – continue to do incredible things in oceans, lakes and rivers around the world, the risk of injury is always remains and is inherent in a sport that ventures beyond the shorelines.”

While jellyfish stings appear to be on the increase throughout the world, there are still relatively few shark attacks around the world.  Charlotte Brynn got hit in the Catalina Channel by what was probably a lemon shark.  Mike Spalding got hit by a cookiecutter shark (cigar shark) in the Alenuihaha Channel between the Big Island of Hawaii and Maui. Bill Goding reported another shark attack of a channel swimmer last night.  This time, Brazilian swimmer Adherbal Treidler de Oliveira was hit by a cookiecutter shark in the Molokai Channel.  Goding explains, “He began his Molokai Channel crossing at 4:23 pm off the west coast of Molokai and was struck at 10:25 pm.  He was hit on the inner thigh.  His boat pilot, Matt Buckman, handled the situation well – it was his second cookiecutter shark attack this year.

This was the third cookiecutter shark attack this year: Eric Schall in March, Isaiah Mojica in April, and Adherbal in July.”

“Adherbal is a huge star in the marathon swimming community,” said Steven Munatones.  “He founded the 36 km Travessia do Leme ao Pontal in Rio de Janeiro, Brazil and has aided and enabled many swimmers from around the world to get their first taste of marathon swimming.   Together with Renato Ribeiro Barbosa, Adherbal was nominated for the 2017 World Open Water Swimming Offering of the Year for the Traverssia do Leme ao Pontal event. We wish him a speedy recovery.” Updates on his injury and recovery will be reported upon receiving more information. Copyright @ 2008 – 2019 by World Open Water Swimming Association

History of The Great Race at Kingdom Swim