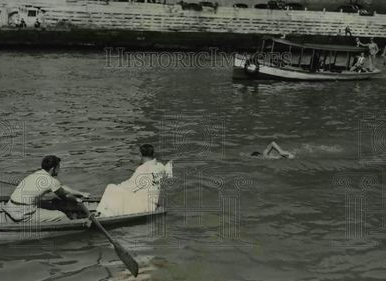 The Presidential Medal of Freedom is the USA’s highest civilian award.

The honor initially rewarded heroic acts during World War II by President Truman, but in 1993 President Kennedy expanded its scope to honor individuals who have made extraordinary contributions to the security of the United States, world peace, cultural or other significant endeavors.

International Swimming Hall of Fame and Swimming World Magazine are supporting the nomination of Adolph Kiefer for the Presidential Medal of Freedom.

During World War II, Kiefer served in the U.S. Navy and created an intensive learn-to-swim program for soldiers. He explained about his role, “I remember a chief came through and I asked him, ‘Can you swim?’ He said, ‘No.’ I asked another chief, and he said the same thing,” Keifer explained in and interview with Brad Bodkin with Team USA Awards in 2014.

“These guys were in the Navy and they didn’t know how to swim. I did my own study on all the shipwrecks in World War II and it turned out that there were more deaths from drowning than from bullets. It took a while to put the program together, but we got the best instructors and before anyone could go aboard a ship they had to go through our class and learn about safety and survival in the water.”

He established a program that included 21 hours of water survival training for sailors, and training of over 130,000 naval swimming instructors who then taught more than two million people how to survive if they found themselves on a sinking ship.

In order to support the Keifer’s nomination for the Presidential Medal of Freedom by the International Swimming Hall of Fame and Swimming World Magazine, friends and supporters can contact the Executive Office of the President, The White House, Attn.: Executive Clerk’s Office, Washington, DC 20502.

Phillip Whitten wrote in Swimming World Magazine here about his nomination, “Unquestionably, Kiefer is a deserving candidate for the award. His greatest accomplishment – and the one of which he is most proud – was having created a survival curriculum for downed U.S. airmen during WWII that saved at least 4,000 lives.

Additionally, he is the most successful swimmer in history, losing only once in more than 2,000 races. He was the only American male swimmer to win Olympic gold at the 1936 Games in Germany. He set world records at every distance in the backstroke, some of which lasted for two decades. He also coached a U.S. Navy team to a national title in 1948, placing four of his five swimmers on the U.S. Olympic team. He is the proud owner of 14 U.S. patents, including the first kickboard, non-turbulent racing lane lines and the nylon swimsuit (replacing woolen suits)
.”