Adrian Sarchet Is Punished Across The Molokai Channel 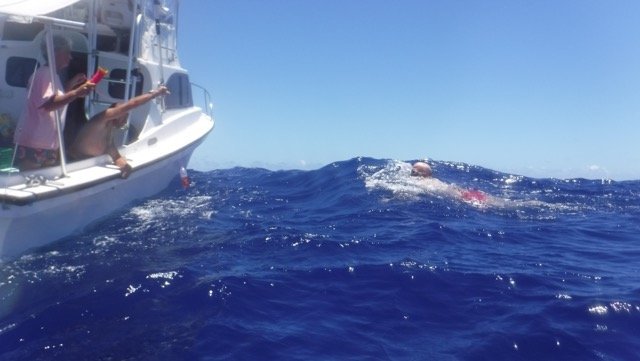 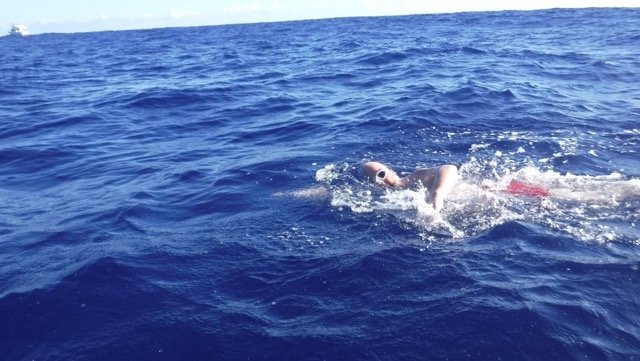 Courtesy of Adrian Sarchet of Guernsey.

Under the escort of Captain Michael Twigg-Smith and escort kayaker Jeff Kozlovich, Sarchet’s fifth Oceans Seven crossing was universally described as brutal. Sarchet provides the details of his swim below.

“I said last year that the North Channel [between Scotland and Northern Ireland] was the hardest swim I had ever done, but the Molokai Channel [42 km between the islands of Molokai and Oahu in Hawaii] beat it hands down.

A couple of days before the swim, a video was posted on Facebook of Raine Pearce’s very recent attempt at the Molokai Channel being abandoned because of the persistent attentions of [two] sharks. Although we had done our research about sharks in these waters, we could really have done without seeing that footage so close to the swim.

The first four hours of the swim are in total darkness in waters that could, potentially, contain sharks. That thought messed with my head as a swimmer. But my two crew members, Pete Rowland and Mandy Mackelworth, also had to swim about 300 yards out to the guard boat before the swim started at 2 am [on July 11th]. They were similarly nervous and didn’t hang around in the water.

We had purchased an electronic shark deterrent system that comprises a powerful 2-metre cable that trails in the water and plays havoc with the electrical senses of most, but not all, sharks. Think of the electric fences used to pen in livestock, but hundreds of times more powerful.

Despite having that system trailing from the support kayak next to me, I don’t think I have ever been so scared about a swim in my life. I kept thinking that the last thing I would ever see was a set of jaws looming up out of the black water. In the second pitch black hour of the swim, trying to match the kayaker’s course based entirely on glow sticks attached to the side of the kayak, I unwittingly swam into the shark deterrent system which hit me, amongst other places, in the teeth. Every muscle that the shark deterrent touched went into heavy spasm and the hit in the teeth caused an instant migraine.

As dawn broke, we hit some very large confused swells, with massive waves slamming into me, seemingly from all directions. The headache somehow converted itself into vertigo at this point. I was sick numerous times in the space of the next couple of hours. Trying to keep my liquid energy feeds down became a bit of a challenge, but I eventually managed to take, and retain, some sea sickness tablets and painkillers. I also changed from clear goggles to polarised goggles as the bright glare from the sun also made me vomit.

At hour seven, I decided to abandon the swim. I wasn’t in the right frame of mind for it, but Pete and Mandy did exactly what they should have done. They refused to let me get out and they reminded me of how far everyone had come in order to do this swim, and how many hours of training I had spent training with Guernsey Swimming Club. That kept me in the water, but I was as grumpy as hell all the way through the swim.

Although the series of swims that I am aiming to complete is called the Oceans Seven, in truth this fifth swim in the series is the only proper ocean swimming I have encountered so far. The water is an amazing colour and incredibly deep [2,300 feet or 701 meters] and the swells, even on a very calm day, are greater than anything I’ve experienced on the other four swims [English Channel, Catalina Channel, Strait of Gibraltar, North Channel]. The other factor is the remoteness of it all; although I was swimming between two islands, those islands are a scattering of little rocks in the middle of the vast Pacific Ocean.

Three quarters of the way through the swim, there is a giant shelf on the ocean floor, so you move from very deep water (about 1,800 feet) to the shallower waters surrounding Oahu (about 300 feet). Getting up onto, and over, that shelf required around 60 minutes of sustained faster swimming; not easy when you’ve already been swimming for 14 hours. That effort pretty much finished me off; the last four miles of the swim took around 3.5 hours to complete.

The landing site is a very small beach on the south east corner of Oahu, called Sandy Beach. My wife Andrea arrived there about 30 minutes before the swim ended and was horrified to discover that the 2 metre waves that we had seen when we checked out the beach a few days earlier had been replaced by 4 metre waves that were sending surfers and their boards scattering in all directions. Pete and Mandy joined me in the water for the last 300 metres and we were guided into the beach by our kayaker, Jeff Kozlovich, who knew the waters well and managed to keep us away from the worst of the waves.

I managed to walk a few yards away from the waterline and then my legs gave up. These swims are very strange – for all the hard work, all the worry and all the pain, there is no feeling of elation when you finish, no moment of triumph. You are just so completely exhausted that all you want to do is lie down and close your eyes. I did just that for about 30 minutes before being persuaded that I really should go and get into the car. Because the guard boat cannot get into the beach, the swim ends with a 40-minute drive to Waikiki Yacht Club to pick up all of your belongings, once the boat motors round to its permanent mooring there. Watching Pete and Mandy picking their way through the Waikiki evening traffic wearing nothing but a couple of beach towels is an image I won’t forget.

I’m very stiff today and can’t raise my arms above chest height, but the bigger problems are the sunburn and the jellyfish stings. Despite wearing high factor waterproof sunscreen, the sun is so intense [in Hawaii] that even the bits that were underwater most of the time are burnt. The jellyfish were a lot smaller than those encountered in the North Channel last year, but they’ve still done a number on my skin in places.

I would like to pay tribute to Pete Rowland and Mandy Mackelworth who bullied and cajoled me through 17.5 hours of swimming when, for the first time in any of these swims, I really didn’t want to be there. They spent all of that time on a pitching boat with me moaning at them, or being utterly thankless of their efforts. They have been wonderful. I would also like to thank my wife and team manager Andrea, who spent the day before the swim as well as well as the day of the swim itself, alone in Oahu pacing up and down like a caged tiger. Finally, a big thank you to our wonderful friends and family and their numerous messages of support including Michael Twigg-Smith and Jeff Kozlovich of the Ka’iwi Channel Association who were absolutely brilliant in getting us to where we needed to be, and for sharing their experiences prior to the swim. 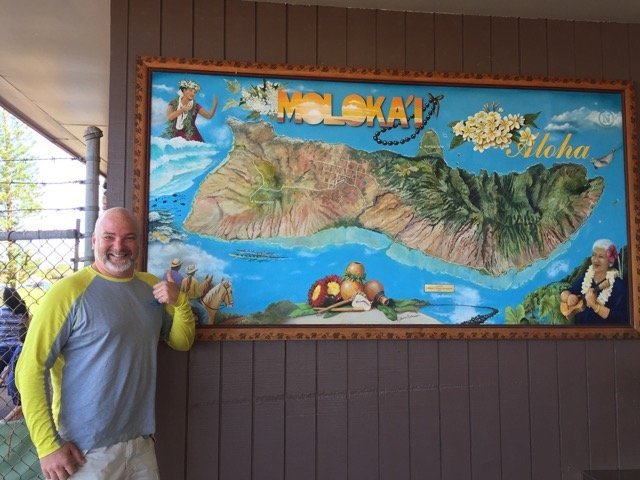 Photos above are courtesy of Jeff Kozlovich of the Ka’iwi Channel Association. The upper photos shows Rowland and Mackelworth providing Sarchet a feed in a very mild swell and Sarchet fighting the elements. The lower photo courtesy of Mackelworth shows Sarchet upon his arrival at Molokai Airport.