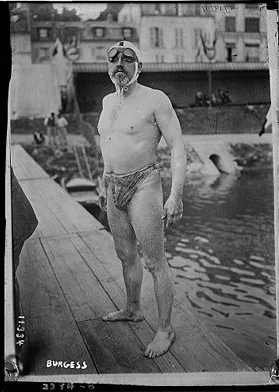 “Any fool knows that of all [English] Channel swimmers only Burgess has an earthly chance of getting there,” said a Dover escort pilot. “I have seen all the best of them, good, bad, and indifferent, including Montague Holbein, Jabez Wolfe, and Heaton; but Burgess’ most dangerous rival was Miss Annette Kellerman, until she decided to abandon further effort.”

He described his crossing to the Poverty Bay Herald, “I began with a good English breakfast, an hour before I started. Ham and eggs are splendid to swim on. I can always start off soon after a meal. I have had practically no training for this, only 18 hours swimming, and the longet swim was six miles.

During the first half of the swim I had the worst time from the third to the fifth hours. It was quite rough. I got very knocked about, and was seasick, though a good sailor. During the first 12 hours I determined several times to give up and go back, and start again when conditions were better. But I am glad I did not.

I used the over-arm side stroke practically all the way, except for a time when my heart gave me trouble with contraction. Then I turned off and swam on my back. An expert swimmer friend told me the over-arm side stroke was the ugliest stroke, and I was the ugliest swimmer he knew. I think he must acknowledge himself wrong. I was never unconscious on the way, though I sometimes go to sleep in the water, but had hallucinations, and saw all sorts of horrible things, too horrible to describe.

When I was very ‘groggy’ and very miserable, the men in the boat sang to me anything they could think of, as loud as they could. That helped immensely. I was stung thousands of times by jellyfish, particularly big yellow ones, but I swam flatter than most men, and a great many slid away under me. The boys in the boat were splendid.

After the first five hours we found the motor-boat was making too much spray and wash. Three of them got out a little rowing boat and towed the motor-boat with the eight other men in it for 17 hours. I can never be grateful enough to the person whose boat I had, and his two friends, all of whom rowed. I ate patent food, chicken, and chocolate, and some tea, which, however, was not for food, but to cure indigestion.

The last five miles, the ‘swimmer’s mile’, as they call it, took me seven and a half hours to do; but I never thought of coming out. I would have gone on another seven hours if necessary. It was a tremendous task to finish, but I was encouraged by the party in my boat and the sight of the people on the shore awaiting my landing.

I was shot past Gris Nez Point by the tide, at a distance of 400 yards from the shore. I made a race to get in west of the point, where there is a sandy spit, but was caught by the off-setting current and carried round the point again, only 100 yards or so away.

I was feeling very queer during this time. My heart seemed as if it had stopped, and I knew I was near the end of my resources. If I had not been an old hand at the game I should have gone under. A person has worked out my mileage for the swim, and it averages one and three-quarter miles an hour. My course worked out like a badly-written M with a loop on the first down stroke

Born in 1872 in South Yorkshire, he was offered an opportunity to set up a French branch of the motor tyre business in Paris as a teenager. He continued his swimming in his newly adopted country of France. By 1900, he was a 2-time Olympic swimmer and water polo who represented Great Britain at the Paris Olympics where he won a bronze medal in water polo and completed in the 1 km swim (DNF), finished fourth in the 4 km open water swim, and fifth in the 200m backstroke.

In the 1920’s, he bought a summer home at Cap Gris Nez as a summer base to train English Channel swimmers from 1922 to 1934. He trained Gertrude Ederle in 1926 when she became the first woman to swim the English Channel.

In 1941 it was reported by the newspapers that Burgess was taken prisoner by the Nazis and held in a prison camp Stalag 142 in Bascanon, France. He was released later the same year.