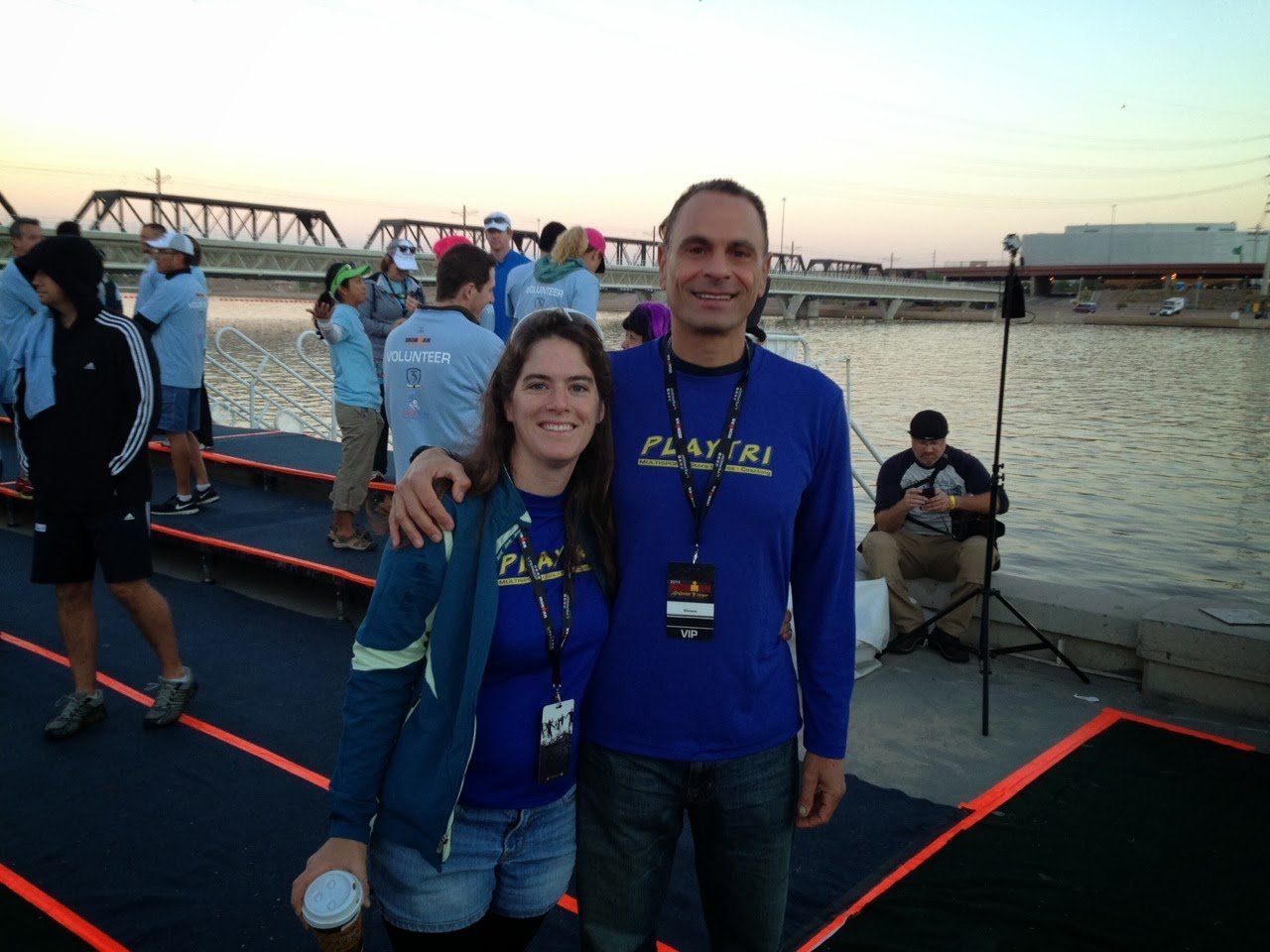 Staci Brode is the go-to person in the Swim Across America’s charity swim in Dallas that brings in hundreds of thousands of dollars in donations to the fight against cancer.

Together with her husband Ahmed Zaher, they own the Playtri Club and organize over 25 events in the Dallas-Fort Worth area together with 20 coaches while managing 4 triathlon retail stores, triathlon camps, a club with open water swim clinics and a USA Triathlon-certified Performance Center.

Zaher founded Playtri over 10 years ago and has continuously expanded so it now offers programs for beginner and advanced triathletes as well as a Playtri Club, Nutrition Coaching, Bike Fits and a new Corporate Training Program.

The pair is relentlessly active and are highly successful coaches and athlete. Zaher has coached countless athletes domestically and internationally as a full-time triathlon coach, a swim coach and personal trainer. He has helped over 20 triathletes achieve their dreams of qualifying for the Ironman and has helped over 50 athletes qualify for the Ironman 70.3 World Championships. He is also the technical advisor for the Egyptian Triathlon Federation.

They shared a bit on how they share the workload and success:

Daily News of Open Water Swimming: How many hours per day are you together?

Staci Brode: We are probably at the stores together 2-3 hours a day, but usually going in different directions and then at home about 2 hours.

Daily News of Open Water Swimming: Do you train together?

Staci Brode: Very rarely. Ahmed is very fast and I am not. We try to do weights together every once in a while, but our schedules almost never coincide. We used to a lot more together before the kids and our two retail stores. But it was more he riding with me on a cool-down or me riding a mountain bike while he runs just due to our differences in speed.

Daily News of Open Water Swimming: Do you compete against one another…even secretly in training or competition?

Staci Brode: When I used to be more competitive before my 6- and 2-year-old, I would always try to beat him in transition, but never did. He is an 8-time Hawaii Ironman qualifier/finisher. I have only come close to qualifying, so there really is no competition in any of the 3 disciplines.

Daily News of Open Water Swimming: Do you push – or console – each other while training or competing?

Staci Brode: Yes definitely. I always try to help keep him updated on his competition at big events and motivated when he is racing. I don’t get to race as much and am more of a participant than a competitor so he is usually with the kids cheering me. We try to not let each other make excuses and make sure working out and staying healthy is a family priority. Sometimes skipping family time to workout is more important and we both realize that. We feel it is imperative to set an example for our kids that working out and staying healthy is a lifelong requirement – you brush your teeth, you go to the bathroom, you eat, you sleep and you workout. If you have your health, you can do anything.

Daily News of Open Water Swimming: How do you both recover when you do a race together?

Staci Brode: We don’t race together anymore. Hopefully this year we will now that my youngest is 2. He is a firm believer in the cryosauna we have at the stores. I just like my compression.

Daily News of Open Water Swimming: When you need some “space”, what do you do?

Staci Brode: Me, I work late at night when the house is quiet. Ahmed, he works out.

Daily News of Open Water Swimming: You are not only two athletes, but you also come from two different cultures. How do you make marital bliss out of that combination?

Staci Brode: Haha. We are a great team who really compliment each other. I think that we both respect the others strengths and opinions. I know when I need to let him make the final decision and he knows when I should take the lead. We are both hard workers who hate to lose and strive to the best at whatever we do, but we have different ways to get there which makes us have different strengths and weaknesses, but always a common goal which makes it much easier.

Daily News of Open Water Swimming: Do you have any advice for couples who work together and plan to get married?

Staci Brode: Wow – know your roles in the marriage and the company. Make sure you agree on who is stronger at what. When you have two competitive people, they want to be right, but when there are two people, one will always be stronger than the other, it just depends on what the subject/topic is who is the strongest. It will just depend on whether you recognize that how successful and happy you will be. One of the hardest things for men and women is we think and feel differently. Now I am generalizing, but I have spoken to many women who work with their husbands and there is always a common thread. Men treat everyone at work the same: no special treatment or feelings spared, but when they come home, that is home and they are the husband. A women looks at her husband as a husband first and a co-worker second no matter where they are interacting so things at work can be taken personally and carry over to home. I haven’t figured out the fix on that one, but knowing the problem is half the battle, right?

Daily News of Open Water Swimming: Do you focus on one thing in the business and he focuses on another?

Staci Brode: Yes. We both used to coach and race direct and found our constant interaction and need to be in charge was not good for us as a couple or a business. I focus on the race directing, marketing and general administration. He has responsibility for the coaching and the retail stores.

Daily News of Open Water Swimming: Are your coaching philosophies the same or different? How so?

Staci Brode: Exactly the same. He was my coach and then I started to coach with him. I learned everything from him and continue to learn every day because I watch and listen to him interact with people whenever I can so I can learn. Because I know his philosophy so well, we are able to discuss his clients and bounce ideas of each other for him and for his clients. I no longer coach due to the demands of the business and family.