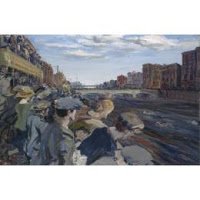 The personable open water swimmer Aisling Beacom added to the colorful history of the Liffey Swim in Dublin, Ireland when she opened the 91st event together with the Lord Mayor of Dublin, Cllr. Andrew Montague.

The first 1.5-mile Liffey Swim in 1920 had an entry of 27 male swimmers. The 91st version in 2011 showcased 350 swimmers of all ages and both genders swimming through Dublin with fanfare and color.

One of the earliest Liffey Swims was portrayed in the Jack B. Yeats 1923 painting entitled The Liffey Swim, which can now be viewed in the National Gallery of Ireland.

Yeats holds the distinction of being Ireland’s first medalist at the Olympic Games by winning a silver medal in the arts and culture segment of the 1924 Paris Olympics. In the competition records, the painting is simply entitled Swimming.