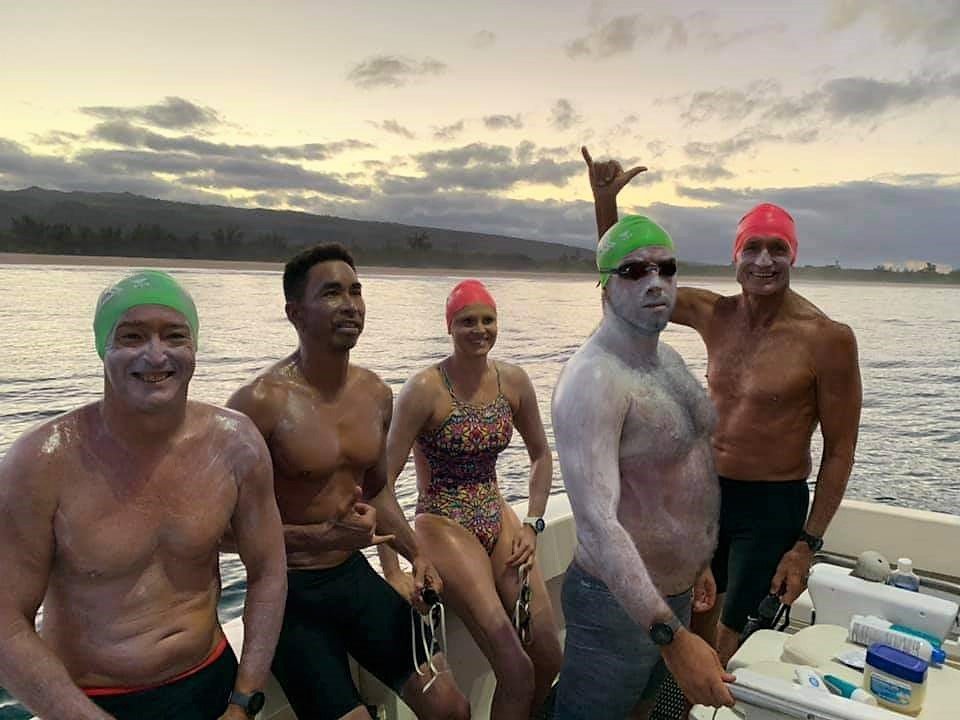 On August 8th, 5 swimmers from the Ala Moana Beach Swim Club completed a 27.3 km tandem crossing of the Kaulakahi Channel from the Hawaiian islands of Kauai to Niihau.

Bill Goding, Lectie Altman, Marcus Guttmann and Ryan Leong, and Stefan Reinke left at 6:09 am from Barking Sands Beach on Kauai. They finished on Ni’ihau 11 hours 38 minutes later. Though Ni’ihau, often referred to as the Forbidden Island, is privately owned, but beaches up to the high-water mark are State of Hawaii property. This allows swimmers to step foot on the island and complete the swim.

The location of the Kaulakahi Channel is remote and not often navigated, so its waters and currents are a mystery which adds to the epic nature of every crossing.

The Ala Moana Beach Swim Club President Ryan Leong reflected on the swim, “We obsessed over tide charts, wind forecasts, surf prediction, current models, reached out to University of Hawaii oceanographers, boat captains, previous swimmers, and even tried to consult with a Master Navigator from the Polynesian Voyaging Society. However, in the end, we realized that those are all variables you can’t predict or control, so we just picked a date and took our chances.”

For the first hour of the swim, the group enjoyed light winds and relatively smooth surface conditions. However, the waters of Kaulakahi exceeded all expectations and challenged the swimmers with strong currents and confused 3-4 foot cross swells.

“I watched our 39-foot escort boat go rail to rail, spin drop, correct itself, and do it all again, all day long. To me, the motion was inconsistent and uncomfortable. I never found a rhythm and was always making adjustments to hold a line,” recalls Leong.

However, as challenging as the surface conditions were, underwater the group was rewarded with a huge variety of wildlife including tiny, invisible stinging jellyfish for the first two hours, clusters of man o war, 4 pods of dolphins, a school of 40 ob. tuna boiling on the surface, multiple schools of opelu, dive bombing booby birds, a large hammerhead shark, and a fully mature, 8-foot Silky shark with a flawless slate grey complexion, complete with a fat remora under its chin. The group agrees that the most remarkable experience of the entire swim was that the Silky shark followed them, like a puppy dog, for the better part of 8 hours. They even gave him a name – Calvin, after Calvin Taetzsch who would likely have joined the group for the crossing, but was recently transferred overseas to Germany to serve our country.

Waikiki Roughwater Swim Committee president Stefan Reinke recalled the final time he saw the shark. “The last time I saw Calvin, Marcus and I were about 25 meters behind the group. Marcus tapped my leg, stopped and said, ‘I don’t know if you care, but Calvin is swimming next to us.’ I looked around and saw him peacefully swimming parallel to us about 5-10 feet below and said, ‘No.’ Calvin became part of the pod and, as unbelievable as it may sound, we were comfortable with him. It was truly a once in a lifetime experience.”

While swimming any channel is an extraordinary feat, two members of the group need to be recognized individually for their noteworthy accomplishments. Bill Goding had originally planned to paddle the group’s escort kayak. However, the day before the swim, another paddler became available which gave Bill the opportunity to swim. He had brought a swimsuit and goggles to Kauai, but had no cap, no special nutrition, and no mental preparation. So, he did what any channel swimmer would do: he swam, and he finished. Including the swimmers in this article there have been 17 successful swims across Kaulakahi. Bill now accounts for three of them. At 67 years young, Bill is the Godfather of Hawaiian channel swimming.

The other highlight was Lectie Altman, a former elite triathlete, who was the victim of a reckless driver that was drift racing when he slammed into her during a training ride two years ago. It stole a promising triathlon future from her, and nearly her life. The drifter was eventually sentenced to a year in jail, but left Lectie with a lifetime of challenges. During her extended hospitalization, Ryan and Stefan told her that they were going to get her to do something safe, like channel swimming, to which she firmly replied ‘No.’ While Lectie still has never technically ‘agreed’ to swim a channel, she has now completed the Kaulakahi Channel and, four weeks earlier, the 14.1 km Au’au Channel.