Aleko Gitolendia Gets Inspired By Buddy

Temur Dadiani and Aleko Gitolendia are double-amputee soldiers from Georgia who were wounded while serving at the International Security Assistance Force mission in Afghanistan. After stepping on an improvised explosive device during their service, they both lost their right and left legs and were gravely injured throughout their entire bodies.

But they didn’t quit and made a recovery.

Corporal Temur Dadiani set a world record for the total number of planche push-ups. On August 3rd 2014, three years after his accident, Corporal Temur’s record was certified by the Guinness World Records. A year after, Dadiani smashed his own world record during the charity marathon called We Win Together (see above)

Aleko Gitolendia encouraged his best friend Dadiani in both his world record attempts, but he never thought about setting any kind of records himself. However, something about his buddy’s success inspired him to do some special.

“I often used to swim while being treated in the USA. I spent hours in the swimming pools and was able to swim long distances without any rest. I was doing this exercise only for my health. Only after Temur had established the world record did I realize that I could do the same,” he explained. “For many people with disabilities, assistance and support are prerequisites for participating in society. We want to give an example to those who need it.”

Now the two friends are preparing to achieve their records together on December 3rd, the International Day of People with Disabilities.

Dadiani and Gitolendia will celebrate the International Day of People with Disability by attempting to set a world record. “By doing so, they want to empower Persons with Disabilities to shatter stereotypes and exceed their personal bests in life,” said organizer David Begiashvili. “Temur will try to establish a more difficult record than his previous achievements, completing the highest number of pull-ups in one minute, while wearing a 40 lb. weight. As a double amputee, Temur will compete against world’s most powerful men such as Bobby Nattoli, Mike Chang (Pullup King) and the current world record holder Ron Cooper. Temur has to complete more than 25 pull-ups attached with additional 40 lb. weight in one minute in order to achieve new record.

On his record attempt, Aleko will complete 3 km swim in the shortest time. During the attempt, Aleko will wear the swimming goggles only. This swim will be more complicated for Aleko because he has amputated both limbs above the knee, in addition to having a broken arm, elbow and wrist, and damaged muscles and tendons. Because that, he has no any sense with his middle finger, ring finger and a little finger, with a decreased sense with thumb and index finger.

In December, the most suitable weather for an open water swim is in Hawaii. That’s why we chose it for our event. The record attempt will be held on the Ala Moana Beach Park in Honolulu, kayakers Jeff Kozlovich and Steve Haumschild, as well as officials from the Guinness Book of World Records

Begiashvili has set up an Indiegogo site to raise money for these attempts (see here and their Facebook page here).

“Even if you can’t make a donation, you’re still a very important part of this project,” says Begiashvili. “We are grateful if you could help other people learn about this project. If you have questions, comments, or suggestions, please email us at [email protected] or visit our website at www.warriorsbeyondabilities.com.” 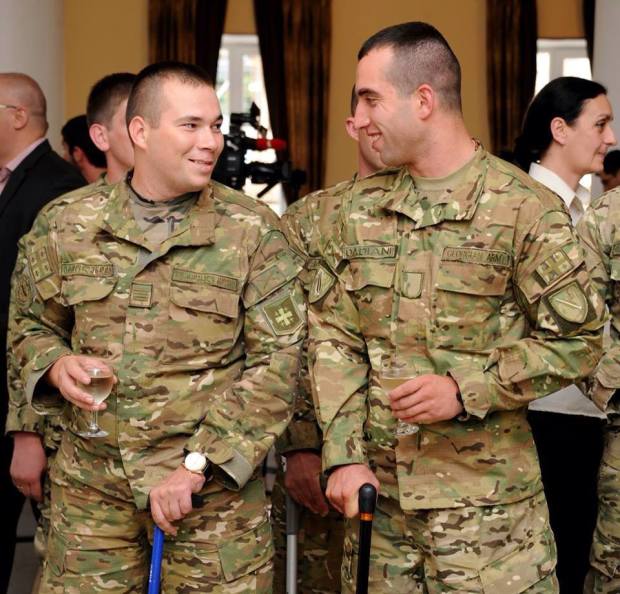