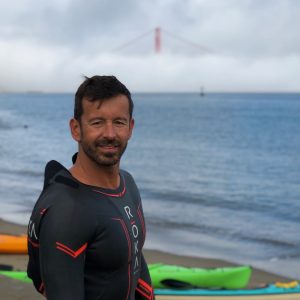 Alex Kostich Swims Around The Rock

Several local veterans of swims in San Francisco Bay, including swims that circumnavigate Alcatraz, mentioned that the overall record for the swim from Aquatic Park, around Alcatraz Island, and back to the start at Aquatic Park is held by Bob Placak in 1 hour 5 minutes 15 seconds, set in 1989 at the Alcatraz Invitational Swim organized by the South End Rowing Club.

Kostich explains his journey, “I visited San Francisco for a quick work trip, decided on a few days ago.  On a whim, I decided to enter an Alcatraz race – 20 years after my first attempt which was cancelled due to foggy conditions.”

Race director Pedro Ordenes announced, “Alex set a new record in the [new 6 km course of the] Swim Around the Rock. Alex completed the new course in 1 hour 10 minutes 29 seconds.

We agreed that Alex’s route and his speed and current navigation was one of the best we have seen in a long time during the history of this race.”

For more information about the longer Swim Around The Rock event organized by Water World Swim, visit its website here.