Alex Meyer Analyzes The Olympic Course In The Serpentine 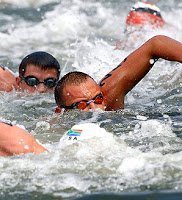 The venerable American sports magazine Sports Illustrated has pegged him to win the bronze medal on Friday’s Olympic marathon swim in the Serpentine.

And many people around the world are pulling for America’s Alex Meyer, the former roommate and good friend of Fran Crippen.

“What a comeback story this would be, if he wins a medal: a Harvard intellectual whose close friend died in a marathon swim…it would be a beautiful story how Alex keeps the legacy of Fran alive and well,” so summarized a number of swimmers from around the world who swam against both men.

Meyer has maintained an understated composure since breaking his collarbone earlier this year, but with the help of recovering and training in an Endless Pool, he has regained his strength and has developed a racing strategy together with American coaches Tim Murphy, Paul Asmuth and Jack Roach.

Open Water Source will provide real-time information on the 50 athletes, their tactics, and strategies as well as background information on the athlete’s training, the rules and history of the sport, and fun facts of the Serpentine.

In addition, a comprehensive guide on the Olympic marathon swim is provided in French, German, Italian, Japanese (日本語), Portuguese, and Spanish. Follow the action online or on television…and enhance your experience with Open Water Source.