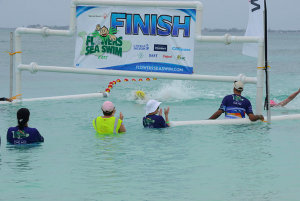 Kelly finished 8th overall in the 27th edition of the race.  Along with nearly 1,000 swimmers, the top swimmers took off and everyone else followed in the point-to-point course.  “I just drafted off one of the Fraser brothers, Olympians Shaune and Brett, most of the time,” said Kelly.

While the top swimmers were racing, many of the other swimmers simply enjoyed the crystal clear waters, white sands and warm weather in the Cayman Islands’ flagship sporting event.

Frank Flowers, namesake of the event, explains, “The unique draw of the Flowers Sea Swim is not only its flawless course conditions along Cayman’s beautiful Seven Mile Beach, but the numerous random prizes. The race is the world’s richest open water event with over US$100,000 in cash and random prizes.

The odds to win a random prize are 1-in-7 and previous giveaways have included blackberries, Ipad’s, hotel stays, and dozens of airline tickets to premier destinations.

Seven Mile Beach will also be the venue of the UANA Masters Open Water Swimming Circuit where swimmers from North America, South America and Central America compete in several events from June 15th.  The 10 km race is on Monday.

Freestyle In The Fog

The Sea and Wild Water