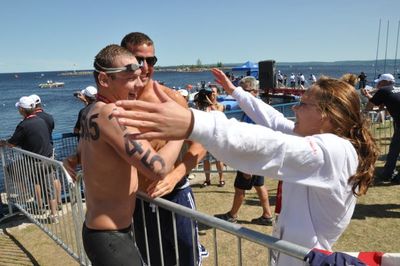 All good things come to an end, especially when it involves an athlete’s career.

“Tomorrow, I will be competing in the last and longest race of my swimming career,” Meyer said.

In 2016, he just missed qualifying for his second consecutive Olympics and will not be heading to Rio de Janeiro. “Making that [Olympic] team was important to me. It was supposed to be my opportunity to prove my full potential after a 2012 Olympics ruined by an injury and a couple of ensuing slump years.”

He had to accept the devastating disappointment and consequences of not redeeming himself. He had to contemplate Plan B so he considered retirement after the 2015 FINA World Championships. “I was faced with the impending reality of life after swimming. But I had an unshakable feeling that before I could step away from the sport with peace and without regret, my story needed a closing chapter.”

His career still had the feeling of an unfinished book. “Plus, I knew I was at or very near the best physical shape I had been in my life.”

Although he has not yet added an English Channel attempt to his resume, he wanted his career to culminate in Canada’s famous Traversée internationale du lac St-Jean. “The journey of preparing for and competing in this epic race would give my career the meaningful and fitting end that it deserves. The first time I touched this Lac St-Jean was in 2010 when Roberval hosted the FINA World Open Water Swimming Championships [where he won the 25 km title]. I was in great company with Fran Crippen, Paul Asmuth, Emily Brunemann, Eva Fabian, Jack Fabian, and the rest of [the USA National Swim] team. Tt was a great start to my career after college and was undoubtedly one of the happiest times of my life as I was beginning a great adventure.”

After winning the 25 km title at the FINA World Open Water Swimming Championships in Lac St-Jean over Valerio Cleri in one of the most dramatic finishes in FINA history, the Traversée organizers extended an invitation to Meyer. He declined as he had other races in mind. He also later admitted, “At the time, I was pretty unaware of the historical and local significance of this race, as well as how important it was to [coach] Paul [Asmuth] who won Lac St-Jean in 1980, 1983 and 1989.

However, as I learned more about the race over the ensuing years, I became increasingly regretful that I gave up the opportunity to compete and it’s since been a major bucket list item for me
.”

Meyer rented a GPS tracking device and will keep in his escort boat throughout the race to show his real-time location on Lac St-Jean on July 31st (see here). There is also be a live video stream here. For more information on the race, visit here.