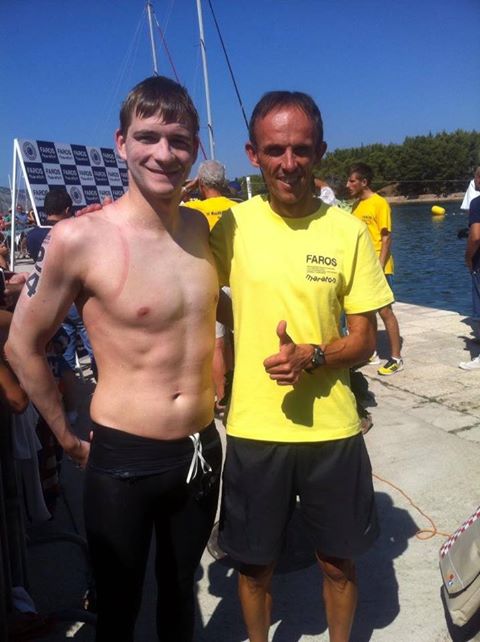 Injuries, illnesses, stings, all kinds of obstacles have been thrown in his way.

But Alexander Studzinski of Germany finally put all the roadblocks behind him as he cruised to a comfortable victory at today’s 16 km Faros Maratón (Croatian International Long Distance Swimming Championships). The German police officer’s victory had been a long time coming after he had earlier earned a series of wins on the FINA Open Water Swimming Grand Prix and international invitations races like the King of the Sea event

Studzinski was just off his course record under perfect conditions. General Secretary Janez Maroević (pictured above with victorious Studzinski), “The championships were great with a sea temperature of 24ºC and an air temperature of 29ºC with the wind at 6 knots. Additionally, we saw young Duje Milan set a new Croatian national record of 3:06:24 who broke Josip Soldo’s record set in 2010 in 3:15:54..”

Studzinski agreed, “It was a nice race. We enjoyed great weather. And I have the best coach in the world…my fiancée Beatrix Eisel!“

The official results of the 2013 Faros Maratón: