Alexander Studzinski, is a gentlemanly understated, but fiercely competitive, professional marathon swimmer from Germany. Often overshadowed in the media by his countryman Thomas Lurz, Alexander is stars of the pro marathon swimming circuit.

This year, Alexander will compete in the world-famous Midmar Mile in South Africa and then will do the 5K and 10K races there before departing for the pro circuit.

He talked about his career that took a seven-month hiatus because of a shoulder surgery in 2008: 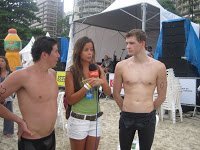 Q1. What was your most difficult race?

Alexander: There are a number of difficult races. Some are tough because they are just so long, like the 88K (54.6-mile) swim in Parana, Argentina. When did it for the first time back in 2006, I didn´t know what to expect. I can say I was a bit scared. It’s was a really long race.

It took me 9 hours and 34 minutes to finish and I was fourth in that year. One year later I was secnd in 8:51 just 49 secconds behind the winner Damian Blaum and 20 minutes in front of Petar Stoychev.

This race is crazy, because you are not allowed to swim in a pack like in all other races. After 10 minutes, the referees split the pack and you have to swim all the way alone. This is tough for your mind. You only see the dirty water, your boat and some trees. And all that for about 9 hours.

Then there are races, like Traversée du Lac St-Jean, which are hard because they are so cold. I don´t like cold water. I did this swim three times and I finished only two times. But my body temperature was 29°C. I had some blackouts after the race. I did not know how I got out of the water and walked to the medical tent. I just woke up there under some blankets. But the medical treatment in Roberval is very good. They always take care of you.

My worst race was in Chiapas, Mexico in the Canyon Sumidero. It was not long, it’s a 15K swim, about 3:30. But in 2007 when I did that race, I was sick before the race but I needed to finish well because I had the chance to get the third place in the overall FINA ranking. So I started the race anyway. But after one hour of swimming, my stomach hurt so much and I started to vomit. And after almost two hours, I was really hurting. It was such a bad experience. Finally I finished, but I was ninth and finished only fourth in the overall FINA ranking. This was a big disapointment for me. 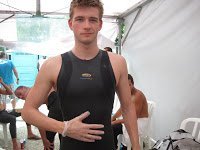 Q2. What was your most enjoyable race?

Alexander: The most beautiful race for me is in Lac Memphrémagog in Quebec, Canada. I have done this swim three times and last year I was third. I like all the people there so much. They are so friendly. The race itself is a big big 34K loop. So you always know where you are and how much more you have to swim.

The lake is very nice and every time I swam there the weather was almost perfect.

Q3. What is your most memorable race?

Alexander: My most memorable race was the 2004 FINA World Open Water Swimming championships in Dubai in the United Arab Emirates. I swam the 25K there. The first and second place finishers (Brendan Capell and Yuri Kudinov) were far away [at the end]. But I was swimming at the front of the pack at the last 5K loop. With just 100 meters to go I was third, but at the finish sprint Evgeny Koshkarov of Russia beat me by three seconds. This were my first world championships and I was ended up in fourth. So I liked that race very much.

With many more races yet to come.