Alexander Studzinski Strives To FINIS What He Started

FINIS announced its sponsorship of professional marathon swimmer Alexander Studzinski. The German open water swimmer from Wiesbaden has competed throughout Europe, Asia, the Middle East, and the Americas. He has been a top athlete on the FINA Open Water Swimming Grand Prix and FINA 10km Marathon Swimming World Cup circuits.

Studzinski’s long list of achievements started in 2004 where he placed fourth at the World Open Water Swimming Championships in Dubai in the 25k. He won a FINA 10K Marathon Swimming World Cup in Singapore in 2006 and the 36 km FINA Open Water Swimming Grand Prix in Capri-Naples in 2007. In 2008, Studzinski faced a crisis due to a shoulder problem. He underwent surgery that led to even more uncertainty. Would he ever again be able to swim, let alone compete at the highest level? 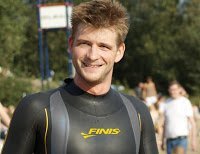 Just as he did during his workouts when he was healthy, Studzinski applied himself to the fullest during his recovery. After enduring countless months of physical therapy work, he painstakingly slowly gained strength but his rehabilitation never progressed soon enough. The uncertainty remained – frustratingly so – but so did his goals.

Time rolled on, but with an optimistic perspective, Studzinski gradually came back and ultimately returned to the professional marathon swimming world circuit ready to race.

Studzinski’s motto that keep him going during the long days of training and races that can be 88 km, “Leidenschaft heißt Leidenschaft, weil sie Leiden schafft.” In English, it means, “Passion is passion, because it causes suffering.”

John Mix, FINIS President and CEO commented on the signing said, “It is not too often that an athlete comes along and shows such a positive and indomitable spirit. We are honored to call Alex Studzinski a FINIS athlete.”