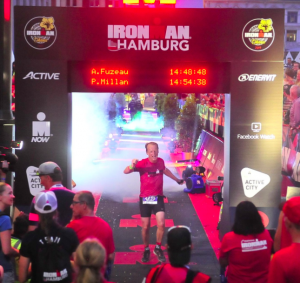 Dr. Alexandre Fuzeauf is the world’s newst Iron Iceman.  The 53-year-old Frenchman is the first athlete to complete an Ice Mile (in 4.97°C water in January*) and Ironman Triathlon (3.8 km swim + 183 km bike + 42.2 km run in Germany in August) in the same year.

The 24th man to complete become an Iron Iceman explains his achievement, “With heavy medical work, family commitments, it was no piece of cake to switch from extreme ice swimming to extreme triathlon in a very short time. I hadn’t touched a bicycle for years and I had to swim in temperature over 20°C. It was really hard.

First, I had to lose my protective fat (8 kg), and stop eating butter and cheese (which is very hard in Normandy).

Secondly, I had to find time to train every day in just 4 months. My program was simple: gradually increase cycling twice a week to reach 140 km a month before the Ironman, to run by night in the forest twice a week for 3 hours without food followed by light dinner at 11 pm – the only free time I could do it. If each part of the Ironman is hard by itself, the cumulation was the unknown field for me.

One month before the Ironman, I tested myself by competing in an Olympic distance triathlon in the sweating heat with lots of climbing in Normandy at Fains. It was more difficult than anticipated. I understood that the answer was, as usual, the final preparation: the mental. To prepare for a marathon in 28°C under the shadow without shadow after swimming and fighting against the wind cycling for 8 hours, you just have to go to another level in your head.

Time to go to Hamburg, for its great people supporting crowd and organization. 2,500 athlètes at the start. Gone for 14 hours 48 minutes race.

A friend asked me what was the most painful. I told him everything is painful and nothing is painful. Of course, at some point a sharp burning pain in the right foot after 30 km of running tells that your foot is bleeding, but at some point you manage again to run and you start forgetting it.

You are in another dimension. You run. Keep running and pass a lot of people who are now walking. A fantastic crowd and family support pushes you to the end. ‘You are an Ironman’ as the speaker shouts at the finish.”

And now he is an Iron Iceman.