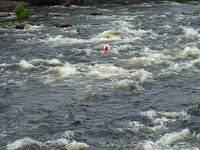 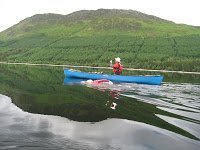 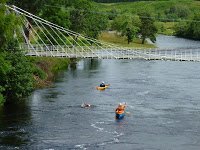 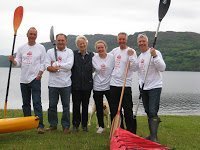 British waterways do not allow anyone to swim in the canals, but Alina Warren did it along the whole of the Great Glen Way.

“All the natural features were used: all the lochs – Ness, Lochy, Oich, Dochfour and a few minor ones as well as all the rivers – Oich, Ness, Lochy,” explained her father and escort Chas Warren.

“The rivers contain both rapids and weirs.”

It was not easy or necessarily safe. In order to tackle the rapids, the 19-year-old University of Aberystwyth student was kitted up with an impact vest, helmet and foot protection. For the lochs, she wore a wetsuit and a red rash vest over the top for visibility by her team on canoes, kayaks and on shore.

Two years of planning and preparation went into the swim where the water temperatures were low – between 7.9°C in Loch Ness to 12°C in the shallow lochs – and the weather was a constant worry in July with northeastern winds.

It was an 8-day stage swim. “We started in Loch Ness. It was very cold, about 7°C on the surface that took us 4 days [to cross], a lot longer than I thought it would take. It took me a while to settle into the swim. After Loch Ness, we hit Loch Lochy in a good 10+ mile swim that took just over 6 hours 30 minutes. We then did River Oich which was fast-flowing with a weir and a few rapids. It was all good fun.

We then moved onto the very top end (north) of Loch Ness and into Loch Dochfour, as well as doing the River Ness, which was more fast-flowing . We then did Loch Oich, and straight after went to River Lochy, including Torcastle, which was great fun where we finished
.”

Warren described Loch Ness as hard, but the rivers as even harder. “I could train the distance easily, but dealing with that level of cold in Loch Ness drains it out of you. I adapted to the cold after 3 days, but that immediate feeling is so difficult to stay in for hours on end. You look up after hours of swimming, and you cannot see the end even remotely close. So it is something [else] you have to deal with.

But the rivers were probably the hardest part. I couldn’t just get into a long rhythm and swim for hours. Things constantly stopped me and I had to be on the ball with concentration
.