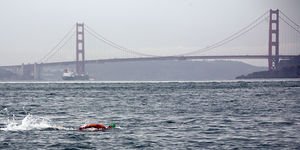 The last time that Oussama Mellouli showed up for the RCP Tiburon Mile, he was just recovering from a devastating shoulder injury and had no expectations. He just wanted to get his feet wet, so to speak. He intended the competition to be fun and it was, if not a bit too cold for his liking.

But times have changed and there are many expectations placed on Mellouli’s shoulders.

Now the 3-time Olympic medalist, including the gold at the 2012 Olympic 10K Marathon Swim, will show up in San Francisco Bay’s Angel Island on September 29th with a huge target on his back. Where he stands at the stand, the direction he heads from Angel Island to the finish in Tiburon across the Bay, and the pace he swims will all be carefully watched by his competitors.

Because for US$10,000, all the elite male athletes will be gunning to defeat the Olympic champion. But with the RCP Tiburon Mile, one never knows the optimal line to take. Everyone has their theories and best guesses, but no one really knows the best line to take until the field is spread out in the middle of San Francisco Bay. One year, Trent Grimsey took a hard left and won by a long shot. The next year, he took the same line and was out of the money.

Defending champion Kane Radford says of the famed 1-mile race, “Yeah I sure am excited. I can’t miss that race. What I expect this year is for it to be yet again another tightly fought swim as it has been the last couple of years. It will all come down to who has the best line and a bit of luck as well. It will be hard defending my title espcially with the likes of Ous Mellouli in the race. Race director Bob Placak always seems to get such a great field of top-level athletes so it should be an interesting race that’s for sure.”

Polish Olympian Mateusz Sawrymowicz is one of the many dark horses in the race, ready to seize any opportunity given to him. “I expect to finish the race in the first half of the group at least, no pressure. That is going to be my first open water race since my youth so I want check my open water technique and have fun. I’m not sure how it will go, but I want compete with these guys and beat them if there will be a chance. It’s gonna be exciting experience for me and I want to take as much as I can out of it. I think it’s gonna be fast race as it’s just one mile but it depends of conditions, of course. I’m not a sprinter but have my confidence with distance swimming.”

Ridge Grimsey, who will be representing the Grimsey family that has had its presence felt in Tiburon for the last 4 years, knows what it takes based on his older brothers’ advice, “I think this year will be won on strategy. This race is not about who is the fastest, but who is the smartest and the swimmer with the best strategy in 60ºF water who uses the currents to win. It should be a fun race.”

The leading men include: