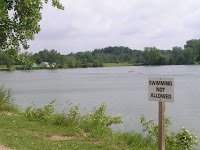 There are good reasons why rules and traditions used in one part of the world are not universally used in other parts of the open water swimming world.

Marine life is one significant reason for differentiation.

Specifically, waters have different levels of risk: open bodies of water can have the absence or presence of sharks and jellyfish. There can be in areas of little or significant tidal flows. There can be non-existent or large surf and ocean swells.

Which all makes for good reason to have different rules and traditions in the various oceans, seas, lakes, bays, rivers, estuaries, channels, canals and lochs of the world.

Andrew Chin of South Africa tells of some differences between the waters of Cape Town and other open water swimming venues in more northern climes: “Various swimmers and support crew have sighted sharks in our waters. There have been various occasions that swimmers have claimed to have swum over a shark. I am of the opinion that it’s the one that we don’t see that is the problem. A few weeks ago, two swimmers were hauled out the water on a Robben island crossing when a 3-meter Great White Shark approached. In fact, the shark circled the support vessel before disappearing into the blue. Incidents like this highlight the need for us to use the protection available to make the crossings as safe as possible for swimmers.”