All Kinds Of Races At Traversée du lac Memphrémagog 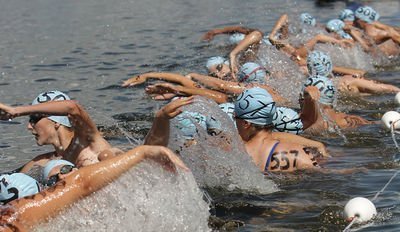 But the Traversée Internationale du lac Memphrémagog, held between August 1st and 4th this year, is much more than the annual FINA Open Water Swimming Grand Prix pro marathon.

Endurance Aventure is preparing the program of shows, programs, amateur competitions, events, entertainment, craft booths, food concessions, and swimmer highlights presented in French, English, Italian and Spanish. The 34 km pro race (Le grand marathon 34 km) will be held on August 3rd where there will be some intriguing match-ups among the 24 swimmers from 14 countries, especially given the vacuum created by Petar Stoychev and Trent Grimsey.

On the Canadian side, there is the duel between last year’s second-place finisher Xavier Desharnais and his Canadian rival and 2012 Olympic 10K bronze medalist Richard Weinberger who has never yet ventured beyond 10 km. On the women’s side, two-time winner Pilar Geijo is the expected favorite.

There will also be a 2 km pro-am race on August 1st where amateur swimmers can compete on the same course with the super-sprint professional competition down the Magog River. Then there is a new challenge 3 km on August 4th in a unique setting. Participants will be transported to a point 3 km offshore, aboard the Grand Cru boat, where they will then jump off the boat to swim the final 3 km (Le grand défi 3 km) of the actual pro marathon course. This allows the amateurs to enjoy the experience of the professional marathon swimmers in the last part of the Traversée.

There is also a 10 km Olympic distance competition (Le 10 km distance olympique) on August 4th where 25 swimmers will compete on a closed Pointe Merry circuit. There is also a 1 km trial (L’épreuve du 1 km) on the same morning for the younger athletes 11 years and older as well as the children’s race (La course des Petits Memphrés) for kids 4 to 11 years.

There is also an obstacle course (La super course à obstacles) where 50% of the course is on land and 50% of the competition is in the water where 12 stations and challenges are scattered around lac Memphrémagog.