All Smiles At The Frances Thornton Memorial Galway Bay Swim 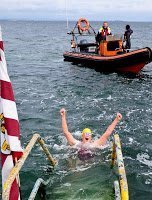 Swimmers were all smiles at the end of the 5th Frances Thornton Memorial Galway Bay Swim in Galway, Ireland this past weekend.

Ronan Collins, co-organizer with Kevin Thornton whose mother is the event namesake, won overall in 3 hours and 3 minutes, followed by Sorcha Barry and Susana Murphy, both in 3 hours and 4 minutes. 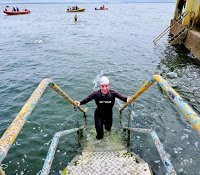 One notable finisher was Ernesto Antonio (5:22) who is survived – and flourished – as a heart transplant recipient. As a charity swim, over €160,000 has been raised for Cancer Care West as a result of this swim and its four earlier edition.