Aloha From One Island To Another 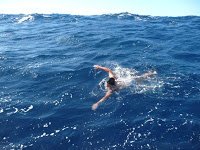 The success probably had several factors working in its favor:

2. The experience of the athletes and crews. The athletes were not only prepared well, but they were assisted experienced crew and expert local pilots.

In terms of distance, location and number of successful channel swimmers, this is the documented record:

4. Maui Channel (Auau Channel): 8.8 miles between Lānaʻi and Maui, although a popular course is the 9.6-mile (15.4 km) stretch of the Maui Channel Swim course. Hundreds have attempted the channel with a recorded 313 successes.

8. Alenuihaha Channel: 30 miles (48.2 km) between Hawaii and Maui. Several attempts made, but only 4 have made it (Mike Spalding, Linda Kaiser, Penny Palfrey, and Harry Huffaker).

9. Kaieiewaho Channel (or the Kaua’i Channel): 72 miles (115.8 km) between Oahu and Kauai. 3 attempts made (one by Jonathan Ezer and two by Penny Palfrey), but no one has made it more than halfway.