Aloha! An Oceanic Rite Of Passage 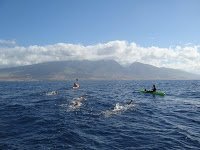 “Training off of Kailua on Oahu, sharks were the [main] concern, but just a little bit about jellyfish,” explained Mike. “The first day, we went out for an hour swim off of Kailua Beach, hitting 15-25 knot tradewinds.

The kids hit an abundance of Portuguese man o war. I explained to them that the man o war hurt and they are a nuisance. But they live in the ocean, so they rule.

About ten minutes into the first training swim, someone got hit, stopped, screamed, and wanted to get out. But we kept going and more than half got hit. The stings were all small man o war wraps, usually on their neck and underarms. But already, egos were taking hold, and they started to resist stopping.” 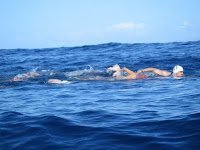 The young ones talked about being stung after they got out and hung out on the beach. “Mackenzie then told me later that week that prior to next swim, the girls were bragging to each other over who got hit the worst and who had longest wrap. It became a ‘right of passage’.

If you swim in the ocean, you will encounter marine life. Those swimmers grew up 5 years in 1 week. While normally teenage girls can get preoccupied with their skin and appearance, their sting scars didn’t phase them. And it continued throughout training.” 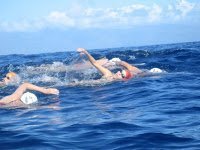 Coach Mark Baker and his swimmers began to adjust and accept the concept of swimming in the challenging elements and strive to accomplish something that many might think impossible, if they put their mind to it and prepare accordingly.

“This is something that I think is important for all people, especially the youth of today, to realize.”

The tradition continues as the next generations takes to the open water.