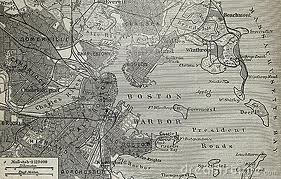 In 1909, professional swimmer Alois Anderle completed the Boston Lighthouse Marathon Swim, but his victory was later expunged due to his walking experience on the course between the Boston Harbor Islands.

The former Olympic swimmer who represented his native Austria in the 1900 Paris Olympic Games completed the last half mile in a severe thunderstorm finishing in a time of 5 hours 38 minutes. However, he was later disqualified for walking across an exposed sandbar at Nix’s Mate.

In a severe thunderstorm when lightning bolts were lighting up the horizon, torrential rainfall was pouring down, cracks of thunder were piecing the skies, and Boston Harbor was churned up in an angry boil. According to Thomas O’Connor, author of South Boston, My Home Town, Anderle’s navigator George De Cost steered Anderle across Nix’s Mate in an attempt to shave off some time under the conditions. Hitting his arms on the bottom by the sandbar, Anderle inexcusably stood up and walked 6-7 steps to get across the sandbar and was thus disqualified by the race officials.