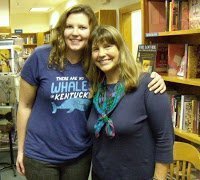 A new year is a great time to seek new goals and Amanda Fair Horton is a budding open water swimmer with a resolution that swimming will be another lap on her journey towards health.

She has been inspired by Lynne Cox, one of the who’s-who of the sport.

Lynne’s equivalent in sports would be Michael Jordan in basketball or Babe Ruth in baseball or Pele in soccer or Michael Phelps in the pool.

Lynne’s sterling reputation was established throughout a lifelong series of channel and extreme open water swimming accomplishments – and enhanced daily as she Lynne continues to touch lives and inspire others. Through words and speeches, so soothing in its delivery, yet so challenging in its context, she connects in a personal way with many on their own path towards their own goals.

Amanda, the freelance singer who works for the American Red Cross, explains this year’s goals, “Swimming is an edifying personal challenge for me. It is very much about working towards mastering a skill as well as about physical and mental health.”