An Amazing Floridian Churning Fast In The Open Water 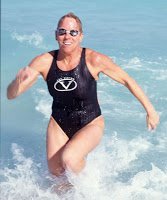 Gail Rice has had quite a career in marathon swimming, renowned for her churning 90 strokes per minute pace.

Gail, a mother, a marathon runner and a nurse, is one of the few people in the world who has completed a modified version of the Triple Crown of Open Water Swimming – the English Channel, the Manhattan Island Marathon Swim and the 24-mile Tampa Bay Marathon Swim.

Gail’s English Channel swim in 1999 (8:12) remains one of the fastest female crossings of all time. Earlier in 1998, she was the first woman to complete the Tampa Bay Marathon Swim, setting a record of 8:34. She was also the first person to swim 22 miles around Sanibel Island in Florida, finishing in 9:27 despite tough currents. To top it off, she also swam 12.5 miles – all butterfly – around Key West where her kayaker confirmed that she never broke stroke. She also swam 21 miles around Miami Beach in 1996, together with Randy Nutt who were the first people to do so.

“She is quite simply amazing,” confirmed Randy.