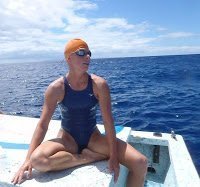 Like Palfrey, the swimmers in New York are stretching the boundaries of what is possible. Conceived by David Barra and Rondi Davies, the 8 Bridges Hudson River Swim is a 7-stage swim that begins at the Rip Van Winkle Bridge near Catskill, New York and ends at the Verrazano-Narrows Bridge in New York City.

It is the longest competitive swim in the world (see list here).

On the 15.2-mile Stage 4 from Newburgh Beacon Bridge to Bear Mountain Bridge, Californian Grace van der Byl is holding strong, finishing in 4 hours 10 minutes. Grace, who is embarking on all 7 stages, describes this Stage 4 in glowing terms. “If you come up for any one stage, this is it. It was epic beauty. Instead of racing the stage, I took my time to enjoy the sights. Stunning. There was an island with a castle, West Point, Monasteries, huge cliffs that seemed to shoot up out of nowhere, beautiful marsh lands, and even trains going past on both sides of the river.”