An Amazonian Event By Darko Novovic 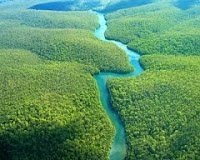 Former Serbian pro water polo player Darko Novovic decided to take up another sport. Instead of the 30-meter pools that dominated his aquatic career, he decided to head to the open water…where he set a new world record.

He swam an average of 16 hours per day in an improvised net cage – or 7.3 km (4.6 miles) per hour – which broke the existing record of the legendary Martin Strel by 20 days (who did not swim inside a cage).

He undoubtedly swam some of the Amazon River head-up water polo style, especially with its deadly piranhas, but we also understand that he trained over two years for this challenge from the Amazon’s starting point in Peru to its final point in Belem in Brazil.

“The water of the Amazon river is the most disgusting thing I ever experienced. I had three showers every day and took three protective vaccines. The Amazon is yellow some days and green the next.”