For the first time in history based on what we know, the United States federal government acknowledged the profession of marathon swimming. 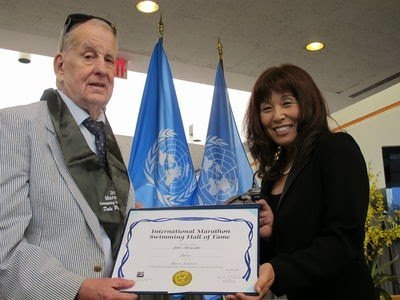 In order to do so, she needed a green card that would enable her to live in Florida as a permanent resident.

Surprisingly, Matsuzaki applied for her green card as a professional marathon swimmer.  That was in fact what she does, but the profession had never been acknowledged before.

¨I did not apply for my green card due to marriage or a different profession like sales, engineering, or coaching. Of course, the immigration authorities had no record or knowledge of marathon swimming as a profession.  But I kept on swimming and proving my profession. Swim, proof, swim, proof…¨

Her diligence, seriousness and passion paid off.  Her profession was officially acknowledged and accepted by the United States Immigration & Naturalization Services.

It was apparently unprecedented.