American Samoa To Utilize Its 3000-Year History With The Ocean 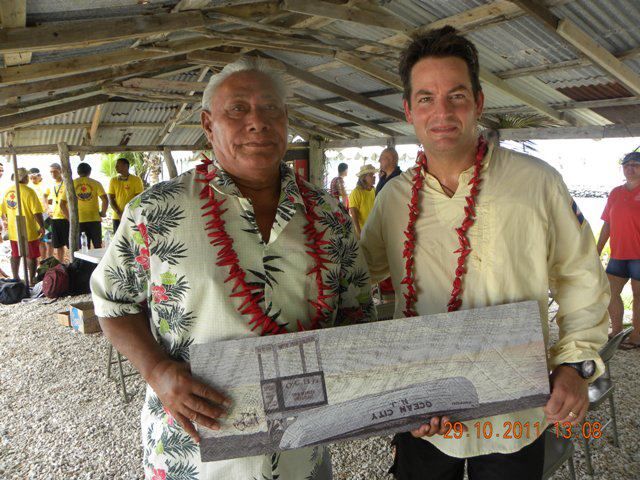 Bruckner Chase was formally given the title of Uila O Le Sami in American Samoa by the village Aunu’u.

His title was conveyed by Fuiava Avaloa, the High Talking Chief of Aunu’u, in May during a blessing and ceremony on the island before his 9-mile crossing from Aunu’u Island to Pago Pago, the main island of American Samoa. Although the swim was believed to be a first, the title was conveyed in recognition of Bruckner’s connection to American Samoa and specifically with its youth.

From the momentum created by the swim, Bruckner and his wife Michelle are now launching an innovative ocean swimming and marine sciences credit course for high school students with support from the Fagatele Bay National Marine Sanctuary, the American Samoa Department of Commerce, the Department of Public Safety, the Department of Education and the office of the Governor.

“At this time, even some of the marine science students at the American Samoa Community College do not have access to advanced swimming programs and therefore can not head out to the reefs just a few yards from shore. Unable to move much beyond waist-deep water, their experiential studies are limited. Both the Governor and the Congressman have expressed the belief that the addition of the ocean swimming and the early teaching of marine sciences is a game changer in American Samoa. This is a huge opportunity and a catalyst to move the next generation forward as the world’s ocean heroes. There are too many drownings and near drownings right now.

Teaching people not only how to be calm and safe in the water while also learning to recognize dangerous situations in the water addresses the major causes of these incidents. Enabling the ability to swim along with a head start in the growing fields of conservation and marine sciences creates incredible career opportunities for the 34% of the population that is under the age of 18.”

Bruckner’s goals for his friends from American Samoa are lofty, but achievable.

While Independent Samoa 40 miles away has ties with the Australian lifeguards, he is setting up relationships for American Samoa with the United States Lifesaving Association. “I want this generation of young people in American Samoa to be able to compete in lifesaving competitions around the world. If we can tie together ocean swimming, lifeguarding and ocean conservation in American Samoa in a program that also recognizes the richness of a culture with a 3,000-year focus on family, community and the ocean, we can build a sustainable model that shows a better way for all of us to connect to the waters around us. In American Samoa, they have an intimate connection and understanding of the ocean that goes back 3 millenia.

Look at what American Samoans have done in the National Football League after being introduced to football just 50 years ago. If American Samoans can become some of the best football players with just 50 years of practice, imagine what they can do with modern aquatic techniques married to 3,000 years of ocean history to become some of the finest watermen of the world.”

Generations ago, American Samoans were swimming between islands. With their knowledge of currents, tides and the wind, they would tie coconuts together and swim between the closer islands. That core knowledge of the ocean, the environment and the wildlife has been somewhat dormant in the younger members of the community, but it is being re-invigorated by Bruckner’s passion to first learn from the American Samoan culture while also sharing his knowledge on how to move through and become part of the ocean environment as a swimmer. His plans are further supported by the National Oceanic and Atmospheric Administration‘s National Ocean Service and specifically the Marine Sanctuary program which also includes Monterey Bay, Channel Islands in California and the Florida Keys where he has also done long distance with plans to hit the other 10 Sanctuaries and Monuments.

“I created an Ocean Swimming curriculum that is based on simple concepts and teaching basic necessities: swimming freestyle, paddle boarding, how to make a how to stay calm in the ocean. In American Samoa, there are three basic issues: people do not know how to swim, they do not know how to stay calm when they get in trouble in the ocean, and there are no eyes on land to help in emergency situations off the shores of remote villages.”

The Community Services Block Grant from the Department of Commerce is providing many of the resources and the curriculum needs, from information on fisheries, coral reefs and marine sciences. The program is also getting education support from stateside organizations such as REEF. “I am interested in moving us all forward by encouraging others to recognize and embrace a personal, emotional connection to the environment that I already love. There are countless communities around the world that are looking for solutions, and I believe American Samoa can lead the way. I want to invite people to tap into their natural affinity for the ocean and see where the water can take them.”