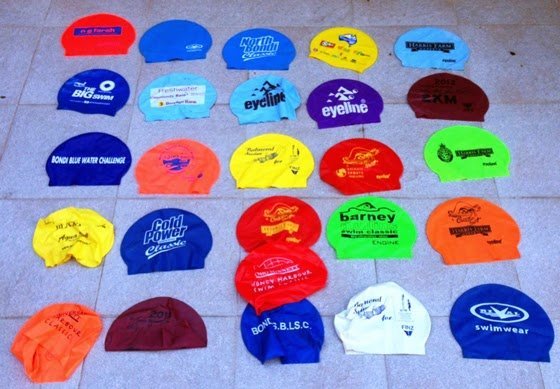 Since the start of the 2013/2014 ocean swimming season, around 20,000 swimming caps have been handed out to competitors at the various ocean swims in New South Wales. If you are a regular ocean swimmer, it doesn’t take too long before you have more caps than you know what to do with. Some may be used again in the pool, and some given to friends and family, but the vast majority of these caps will end up in land-fill having spent most of the season at the bottom of your swimming bag.

This year, at the 2014 Coogee Island Challenge on April 13th (2.4 km swim around Wedding Cake Island), we are running a swimming cap amnesty. Bring down your old caps that you no longer use, or donate after your swim, and we will save your caps from an ignominious end in land-fill or as rubbish scattered on the beach

There are no companies that recycle swim caps, mostly made of latex or silicone, so the collected caps will be donated to the following organisations for re-use:

• The Frugal Forest is a One Off Makery project, supported by Midwaste, the Australia Council for the Arts and Glasshouse Port Macquarie. Drawing in artists, musicians, scientists, community, business and industry, they aim to build an intricately detailed forest entirely from salvage. Why? Because nothing is wasted in the forest, and we could really learn from that. For more information, to watch the project unfold, donate your junk or to get involved here.

• Reverse Garbage is Australia’s largest creative reuse centre, committed to diverting resources from landfill – approximately 35,000 cubic metres or 100 football fields’ worth per year. Almost 40 years from its founding, Reverse Garbage is now an internationally recognised, award-winning environmental co-operative committed to promoting sustainability through the reuse of resources, as well as providing support to other community, creative and educational organisations. For more information, visit here.

• Various Council Pools to be used by those needing a cap on the day.

The Coogee Island Challenge Ocean Swim is held on Coogee Beach on April 13th, a 2.4 km swim around Wedding Cake Island in the eastern suburbs of Sydney. For more information, visit here.