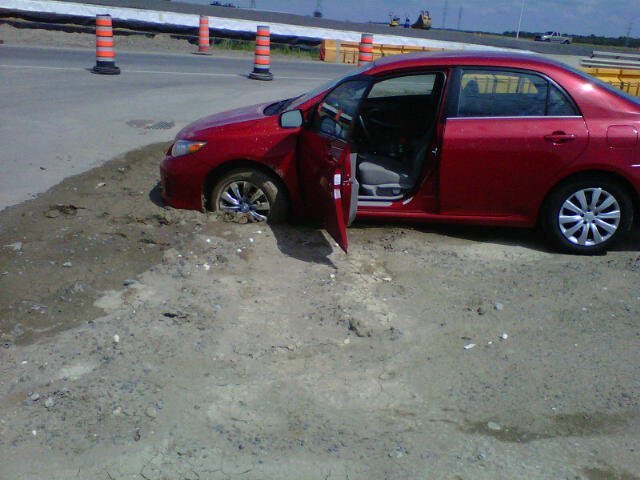 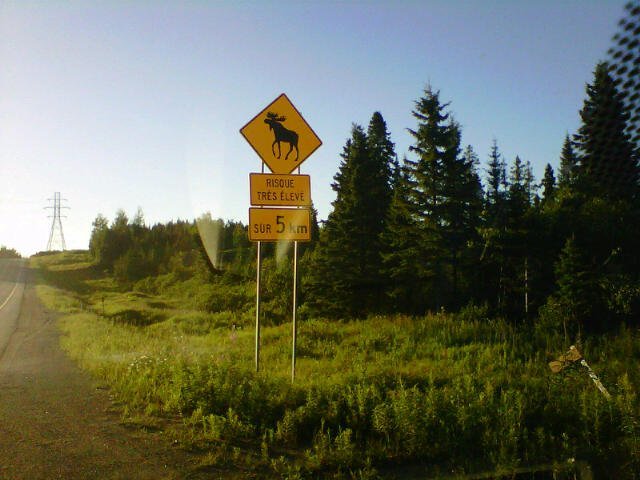 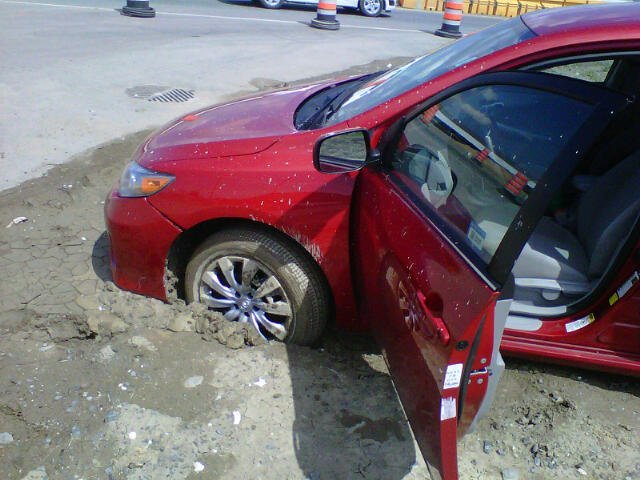 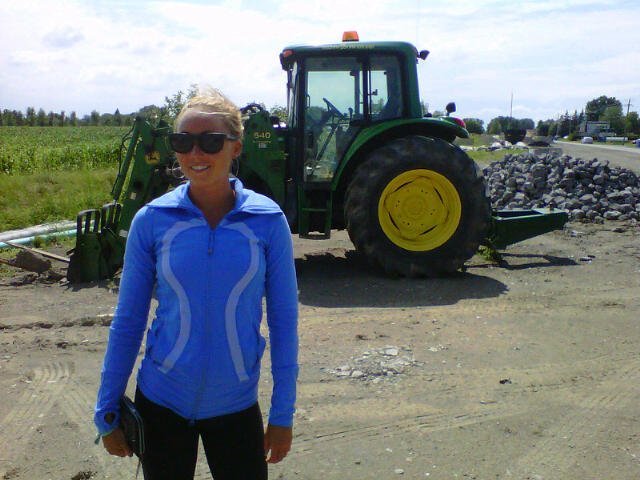 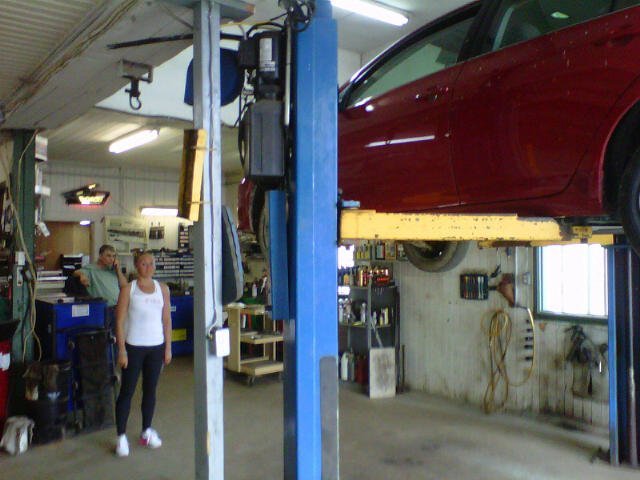 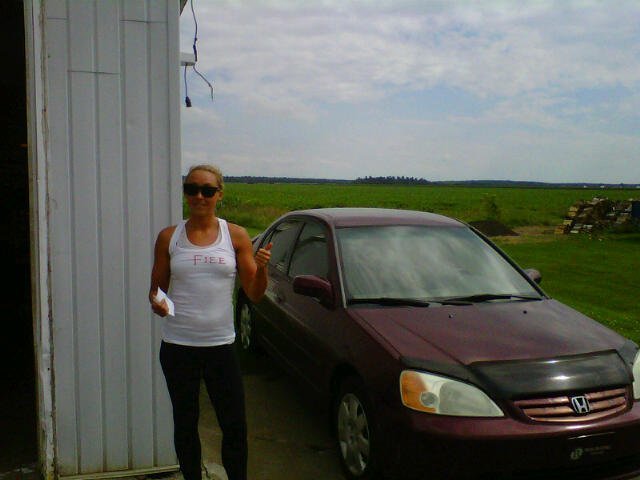 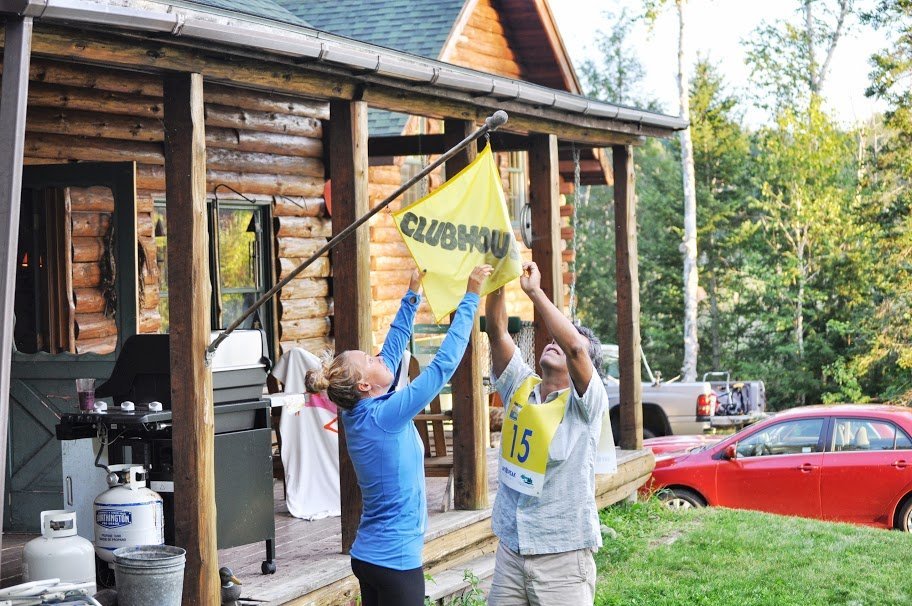 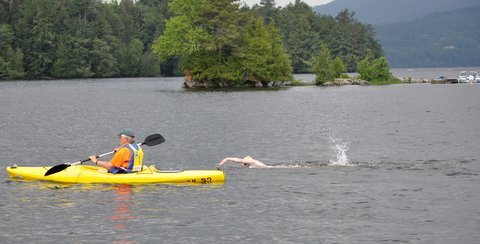 While moose are on the roads, drivers in Canada must be careful. Very careful. One false move and a vehicle hitting a moose can cause great damage to the moose, the car, and its inhabitants.

There are close calls and sometimes people drive off the road or swerve to avert danger.

And sometimes those people drive into trouble.

Today a coach and a marathon swimmer went off the road and got stuck in the mud. While they were not hurt, the mishap into the soft mud was only the beginning of a memorable adventure that lasted until sundown.

Stuck in the mud without Canadian money in a construction zone, the pair were very kindly assisted by some alert construction workers who were excited to meet a swimmer from the Traversée internationale du lac St-Jean. Never before had they met a Traversée swimmer in person and they were excited to meet one even as they smiled about the predicament the swimmer as in.

Soon, a tow truck was called and the car was excavated from its muddy pit. After getting pulled out of the mud, the swimmer and coach continued on their journal heading southward through Quebec to Magog. The swimmer was planning to participate in this week’s 34 km Traversée Internationale du lac Memphrémagog. But the car started to shake violently if they drove faster than 40 kph. So they got off the highway and started to look for an automobile repair shop as soon as possible, driving delicately through corn fields that spread themselves out as far as the horizon.

After passing dozens of silos and farms, the swimmer and coach found a small auto repair shop. They rolled into the shop at the edge of a field of corn and explained their vehicular problems to the man in charge. The mechanic was inquisitive why two Americans in a rental car found their way to his little shop. Their response, “She just swam Traversée internationale du lac St-Jean in Roberval, and we are headed to Traversée Internationale du lac Memphrémagog in Magog,” brought the widest smile possible to the mechanic. “Let me see what I can find,” he replied as he got to work. Within minutes after intense concentration examining the car, he identified the problem and asked for the keys. The swimmer and coach stood incredulously, “The keys are here.” And off the mechanic drove off without a word. With their money, passport, and all their worldly belongings in the car, the pair figured their unexpected adventures had to continue. “Hmmmm, we hope he comes back.”

15 minutes later, the red rental car returned, cleaned and running like a charm. Smiling proudly, the mechanic would not hear of receiving any money. “Please, please, let’s take a photo.” A photo with a professional marathon swimmer was all that he wanted for his time and efforts.

The pair then set off for the next swim, passing the city of La Tuque famous for its 24-hour relay swim of the 1970s (24 Heures La Tuque), past the city of Magog, and onwards to the shores of Lac Memphrémagog. Once at the shores of the Mighty Memphrémagog, they visited The Clubhouse, the headquarters of NEKOWSA (Northeast Kingdom Open Water Swimming Association) co-founder Phil White. The setting on the lake as the sun started to set was beyond words, simply majestic.

As White barbequed some NEKOWSA chicken, whipped up the famous Kingdom Swim smoothies, and husked corn for his tired guests, they plotted the next day for a swim around Black Island, Bell Island, and Cove Island sitting in the middle of Lac Memphrémagog. “It’s a 5-mile loop around these 3 islands just west of Jay Peak Resort and south of the USA-Canadian border,” explained White.

When mishaps and miscues happen on land, the best way to cope is sometimes with a nice long swim in a majestic lake.

Last photo shows Emma Otto-Moudry rounding Cove Island (with Black Island in back) with her kayaker Don Houghton of Craftsbury, Vermont on her way to a second-place finish at the inaugural WOWSA World 10 Mile Open Water Championships.