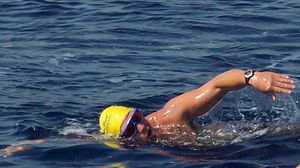 And he has been doing an average of one Alcatraz Island swim a week for 20 years, in conditions that have ranged from tranquil to treacherous with only 2 weeks off for vacation per year.

Emich will join Steven Hurwitz of the South End Rowing Club in a special celebration.

The duo will both complete and then celebrate their 1000th solo Alcatraz crossings together on the morning of June 11th.

Emich and Hurwitz, will be joined by a flotilla of well-wishers, including Joe Oakes and Bob Roper, two local swimming legends.

The 2-mile swim coincides with the 51th anniversary of the famed escape from the Rock by Frank Morris and John, Clarence, and Alfred Anglin. The event will help raise money for Hospice of the Bay, San Francisco Bay Keeper Foundation and the South End Rowing Club.

“The 1000th crossing for the swimmers is a symbolic victory for all those who yearn for freedom – those who have tried to accomplish what doubters said couldn’t be done and those who literally tried to escape the Rock against all odds,” said Hurwitz, the youngest swimmer in history to complete 500 crossings. “The 1000th is also an opportunity say thank to three organizations that are making a huge difference in the Bay Area.”

Accompanying the three swimmers will be a pilot boat navigated by the swimmers’ 75-year-old coach, Napa Bob Roper. Emich on Roper, “Bob Roper just adds to this celebration of San Francisco and the mystique and beauty of an island that has captured the imagination of people around the world. This is a great day for all those who enjoy the splendor of this magnificent body of water and island.”

San Francisco Bay frequently is subject to high winds, whitecap waters reaching four feet and myriad types of carnivorous marine life. Adding to the complexity, the swimmers must navigate through extremely strong and tricky currents and endure water temperatures that dip to 7.7ºC (46ºF). Neither Emich or Hurwitz ever wears a wetsuit and completely depends on their own bioprene.