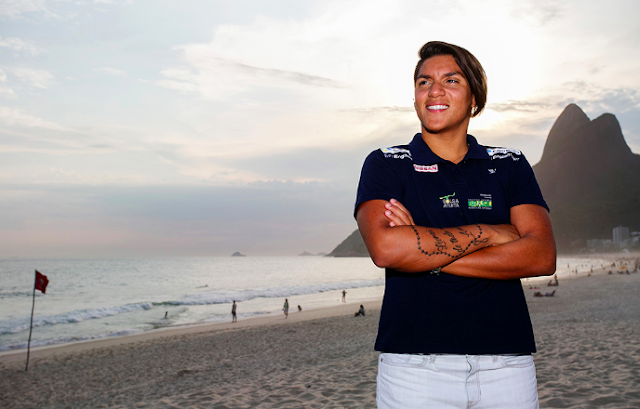 Steven Munatones said of her performance, “There is no one more active on the professional marathon swimming scene than 27-year-old from São Paolo. She remains a force to be reckoned with under any conditions – warm or cold, turbulent or tranquil – anywhere (Asia, Americas, Europe) at any distance anytime against anyone. Her consistency is so remarkable that it is more noteworthy when Cunha is not on the podium than when she is.

Over a 6-day span at 2019 FINA World Championships, Cunha qualified for the 2020 Tokyo Olympic Games by finishing 5th in the 10 km on Day 1, won the 5 km on Day 4, led off 4th place Team Brazil in the 5 km relay on Day 5, and then won her fourth career 25 km marathon on Day 6 (after winning in 2011, 2015 and 2017). She also won the Pan American Games 10 km in Lima. She also won the 10 km race in Taiwan’s Sun Moon Lake and finished 2nd in the FINA/CNSG Marathon Swim World Series after winning races in Nantou (China), Setúbal Bay (Portugal), and Lake Ohrid (North Macedonia). Over the course of 2019, she was the most dominant open water swimmer; that achievement is incredible because she came back after a serious health scare where her spleen was removed. It was an absolutely incredible year for her.”

Cunha had a busy schedule at the 2019 FINA World Championships in Gwangju, South Korea.