Ana Marcela Cunha Is The Unexpected Queen Of The Sea 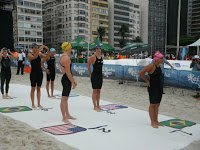 Ana Marcela Cunha of Brazil and Americans Christine Jennings and Ashley Twichell went blow-for-blow, stroke-for-stroke throughout the professional 4K King and Queen of the Sea event on Copacabana Beach.

In the pole position on the first leg, Ana Marcela dialed back the pace on the second loop when Ashley moved into the lead. “It was just like World Championships when the pace slowed down. I wanted to pick it up.”

Ashley pushed the pace into the third loop that dropped the field with the exception of Ana Marcela and Christine. By the fourth of five loops in the 17°C (62°F) water, it was clear one of the trio would emerge victorious. The pace was unrelenting by the fifth and final loop and the women were sprinting in nearly stroke for stroke. Less than 25 meters from the shoreline, Christine burst into hyper-drive and stood up a few strokes before her competitors.

Then the unexpected occurred in a blink of the eye.

Christine planted her foot wrong and appeared to hyper-extend her knee, jamming her leg hard into the hard sand. She screamed in pain and crumbled to the shore. As the medical personnel rushed to her side, Ana Marcela and Ashley ran on by to claim first and second.

At time of publication, Christine is in the hospital being treated.

Photo above shows the women at the staggered start (based on their sprint finish position). Additional photos are here.